How Much Should You Pay for a Sales Lead? 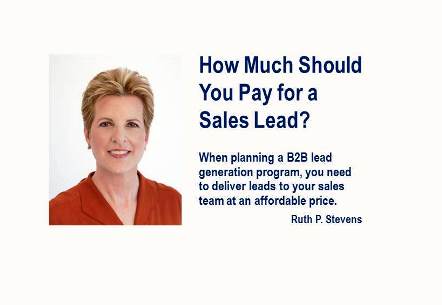 When planning a B2B lead generation program, you need to deliver leads to your sales team at an affordable price.  A neat way to determine in advance how much you can spend on a lead is to calculate the Allowable Cost per Lead for your campaign.  This number can then be used as a benchmark for evaluating campaign investments, and deciding which ones are likely to work.  If a campaign is looking like it’s not affordable, then you’ll want to make some tweaks, like find a stronger offer, or narrow your targeting.

Begin by calculating your cost per inquiry. Assemble the total direct campaign costs, including all fixed and variable costs that can be directly attributed to the campaign. Include creative and pre-production work, the cost of developing and producing content, and the normal variable costs of campaign development and execution. Divide this amount by the number of expected campaign responses, and voila!  There’s your cost per inquiry.

Then, estimate the costs associated with qualifying a lead. Don’t try to determine this number on a per campaign basis—it’s too hard. Instead, calculate an average qualification cost for inquiries over a set period, such as a year. Gather up all your inquiry-handling costs, including the direct headcount involved in inquiry capture, fulfillment, qualification, and nurturing. If your back-end processes are outsourced, gathering the data is as simple as adding up the bills. After you have a number for the year, divide it by the number of inquiries handled in the year. This number will serve as your average cost to qualify an inquiry.

Let’s look at an example of how this works. The chart works through some hypothetical numbers to arrive at a cost of lead closed and an allowable cost per lead, and compares the two. Your goal is for the cost of a closed lead to come out lower than the allowable—obviously. If it’s higher, you lose money on the campaign.

To get to Allowable Cost per Lead, it’s not actually necessary to know how many inquiries will be generated, qualified, and converted. But you do need to know the cost per inquiry, the cost to qualify an inquiry, the qualification and conversion rates, the net margin per order, and the direct sales expense per order.

In this hypothetical example, say the campaign spent $15,000 and generated 150 inquiries. Whatever the cost and the responses, the important number is the cost per inquiry. Here, we have hypothesized it as $100. Separately, the average cost to qualify an inquiry for the year was calculated at $50. We divide the qualification rate (25 percent) into the total cost per inquiry qualified ($150) to calculate the cost of a qualified lead. Then, we divide that by the conversion rate (30 percent) to get the cost of a closed lead ($2,000).

This number is then compared with the allowable cost per closed lead ($2,500), which is a simple calculation of the net margin per order minus the cost of sales (hypothetically set here as $3,500). In this example, the campaign looks promising, because the expected cost per converted lead is $500 less than the Allowable Cost per Lead.

If you put this information in a spreadsheet and play with it, you can quickly see how much leverage there is on the back-end, meaning after the inquiry has come in and you are working it through qualification and nurturing. A few efficiencies on qualification rate and conversion rate work wonders on campaign ROI.

Ruth P. Stevens consults on customer acquisition and retention, and teaches marketing at companies and business schools in the U.S. and abroad. Crain’s BtoB magazine named Ruth one of the 100 Most Influential People in Business Marketing. She is the author of Maximizing Lead Generation: The Complete Guide for B2B Marketers, and Trade Show and Event Marketing. Ruth serves as a director of Edmund Optics, Inc., the HIMMS Media Group, and the Business Information Industry Association. Learn more at www.ruthstevens.com.

This article was published on Biznology on October 28th, 2015