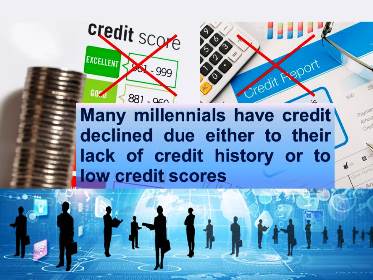 ID Analytics LLC shared new research revealing that over six out of 10 millennials declined for credit are not seen applying again for at least 12 months. The study found that millennials often apply for credit but are declined due either to their lack of credit history or to low credit scores, despite often having an ability to repay according to data from the ID Analytics ID Network®, one of the nation’s largest networks of cross-industry consumer behavioral data. A frequently referenced Bankrate.com study reports that 63 percent of millennials do not have a credit card. While many millennials may not own credit cards, it is not for a lack of applying for credit. New data from ID Analytics finds that millennials are applying for credit cards at higher rates than Generation X or baby boomers (35 percent vs. 29 percent vs. 28 percent, respectively). ID Analytics also found that millennials actually make up a larger percentage of total credit card applicants (35 percent) than marketplace loan applicants (28 percent), indicating that this group is  interested in traditional forms of credit.

Decline of a Generation:  While they may be applying for credit, millennials have lower credit activation rates than baby boomers. Fewer than half of millennials, the largest generation of U.S. consumers, have credit scores that will qualify them for credit accounts with most mainstream lenders. One-third of millennials cannot be scored by a credit bureau due to their lack of credit history, and of the ‘scoreable’ group, two-thirds of consumers under 30 have subprime or non-prime credit scores. ID Analytics’ research shows that the most common consequence of declining a millennial applicant is that the consumer walks away for at least a year—both from the enterprise and from credit/service seeking altogether.

Alternative Data Puts a Face to Credit Invisibles: In order to capitalize on these credit invisible millennials and increase market opportunities, lenders will need to use alternative credit data. Alternative data consists of credit behaviors not consistently reported to national credit bureaus, including telecommunications and utilities payments and online lending activity. Using this alternative data, lenders are able to gain a more complete view into a consumer’s credit risk and worthiness, which is particularly crucial for the millennial demographic.