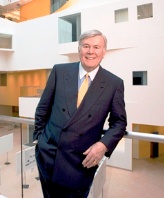 Media pioneer Patrick McGovern died on Wednesday at Stanford Hospital in Palo Alto at the age of 76.  McGovern was the founder and chairman of International Data Group , which publishes  200 magazines, operates 460 websites and produces 700 events in 79 countries around the world.  Its most well-known magazine, PCWorld, with 39 million readers in 49 countries, announced in July 2013 that it would move to an all-digital format in the U.S.

McGovern was one of the country’s most successful, self-made entrepreneurs, a true bootstraps billionaire.  He was worth $5.7 billion, ranked 244 among the World’s Billionaires in March. He first debuted on the Forbes 400 list of America’s richest in 1982, our inaugural issue. He was ranked 88 in America in the 2013 Forbes 400.

Invested in China:  In 1980, McGovern established one of the first joint ventures between a U.S. company and one in the People’s Republic of China, and in 1992, McGovern established IDG Technology Ventures, one of the first venture capital firms in China. In recognition of his great contribution to China’s information industry and venture capital field, McGovern was awarded the International Investment Achievement Award at the CCTV 2007 China Economic Leadership Award ceremony in Beijing. This was the first time the award was given to a foreign investor. The award ceremony was broadcast live nationwide on China Central Television (CCTV). McGovern made 130 trips to China in his lifetime.