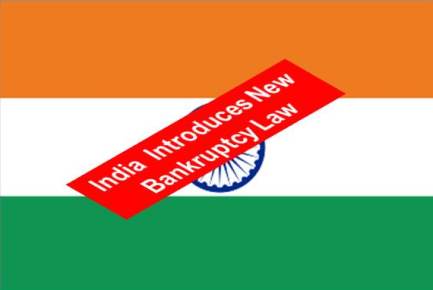 The adoption of a national bankruptcy law has been keenly awaited by investors and is arguably the most significant reform adopted by Prime Minister Narendra Modi’s government to date, reflecting the urgency of dealing with mounting bad debt problems at state banks.

The reform comes at a time of heightened focus on the bad debts weighing down India’s banking system.  The new law, which has been cheered by investors, will provide a single framework for the recovery of debts within 180 days by all creditors of insolvent companies. ed through the upper house on Wednesday less than a week after its approval by the lower house — swift approval that contrasts with the treatment of a key government bill to introduce a national goods and services tax, which has been stalled in the upper house for months. In 2002 India adopted a new law that sought to strengthen the hand of banks to deal with bad debt and defaulters by giving lenders the power to seize and auction property pledged as collateral against loans for the first time. But that still fell short of a comprehensive bankruptcy process.

Corporate insolvencies in India on average take more than four years to be resolved, much longer than in most other big economies, according to World Bank data. One reason has been the lack of an overarching system for debt recovery, forcing different classes of creditors to pursue their claims through a range of processes. The failure to achieve swift restructuring has led to extensive erosion of value in distressed companies, in some cases exacerbated by controlling shareholders transferring assets out of the business.

The recovery rate for creditors in Indian insolvencies is only 25 per cent, compared with 77 per cent in high-income nations, according to the World Bank.