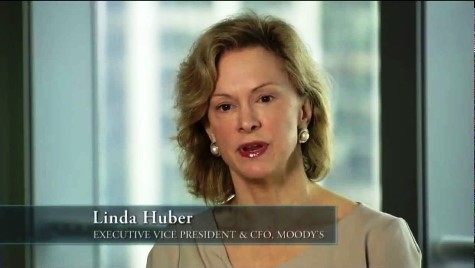 Moody’s Corporation (NYSE: MCO) announced that Linda S. Huber is leaving to pursue other opportunities after more than 12 years of service as Executive Vice President and Chief Financial Officer. Ms. Huber has agreed to remain at the company for a transitional period, and Moody’s has begun a comprehensive search for a successor.

“Linda has made a significant contribution to the success of Moody’s and will leave a legacy of strong and stable financial leadership,” said Raymond McDaniel, President and Chief Executive Officer of Moody’s. “As the member of our senior leadership team responsible for our global finance activities, she has been an exceptional steward of our financial performance over a sustained period of time. In addition, she has led a number of our critical Shared Services functions and has been a strong advocate for the advancement of veterans, women and diversity within our company. On behalf of all of us at Moody’s, I thank her for her outstanding service and wish her every success in the next phase of her career.”

“I am immensely proud to have had the opportunity to work with such a talented team at Moody’s,” said Ms. Huber. “I am confident that the company is well positioned for the future and believe that now is the right time for me to pursue my next career move.”

Ms. Huber joined Moody’s in May 2005 from U.S. Trust Company, a subsidiary of Charles Schwab & Company, Inc., where she served as Executive Vice President and Chief Financial Officer. She previously worked in increasingly senior roles at Freeman & Co., PepsiCo, Bankers Trust Company and First Boston Corporation. She also held the rank of Captain in the U.S. Army, where she served from 1980 to 1984.

Ms. Huber holds an M.B.A. from Stanford Graduate School of Business and a B.S. in business and economics from Lehigh University. She is a director of the Bank of Montreal.