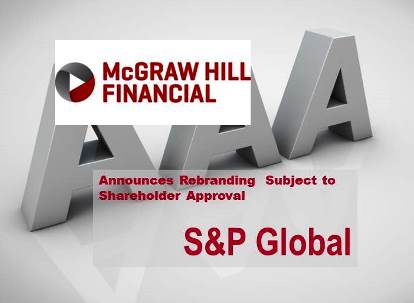 “An important goal for the Company has been creating growth and driving performance.  In 2015, we made great strides on both fronts.  Two prominent examples are the addition of SNL, a high-growth data and analytics business to help create growth, and the progress on the Company’s productivity initiatives which drove performance with a significant improvement in the 2015 adjusted operating margin,” said Douglas L. Peterson, President and Chief Executive Officer of McGraw Hill Financial.  He added, “Creating growth and driving performance continue to be at the forefront of our efforts in 2016.  Our focus will be on execution in a difficult macro-economic environment as we drive financial performance, integrate SNL, enhance the customer experience and expand collaboration enterprise-wide, all while maintaining a culture of integrity and accountability.”

Margin Improvement: Adjusted operating profit margin for the Company increased 280 basis points for the second year in a row to 38.7%, which includes 126 basis points of deal-related amortization.  This marks the fourth consecutive year of greater than 100 basis-point improvements.  Excluding deal-related amortization, the 2015 adjusted operating margin reached 39.9%. 4th Quarter, 2015:  Revenue increased 27% to $405 million in the fourth quarter of 2015.  Excluding SNL results, organic revenue growth was 7%.  Quarterly operating profit decreased 12% to $50 million.  Adjusted operating profit increased 22% to $75 million.  A number of restructuring actions have been implemented as part of the integration of SNL and S&P Capital IQ.

Platts delivered high single-digit organic revenue growth in the fourth quarter primarily due to Petroleum and Metals, Agriculture and Petrochemicals (MAPS) as well as strong growth in Global Trading Services.

J.D. Power had a strong finish to the year with a double-digit increase in reported revenue, and high single-digit organic revenue growth driven primarily by its auto business.  The business is also benefiting from the addition of NADA Used Car Guide and the newly formed data and analytics group.  The Company initiated an active program to sell J.D. Power and has received considerable interest from third parties.  The Company believes that a sale is probable in the next year and the assets and liabilities of J.D. Powerhave been reclassified as held for sale in our consolidated balance sheet as of December 31, 2015.

Pending shareholder approval, the Company will be re-branded “S&P Global”.  This name leverages the Company’s rich heritage and its powerful financial data and analytics brands, while signaling a strong global footprint and broad portfolio.  The change will be effective pending a shareholder vote on April 27, 2016.

Editorial Comment:  Over 80% of the company’s revenues are sold under the trade mark of S&P, thus renaming the corporation S&P Global makes sense.    If shareholders approve, the McGraw Hill Publishing / Education aura will come to an end.