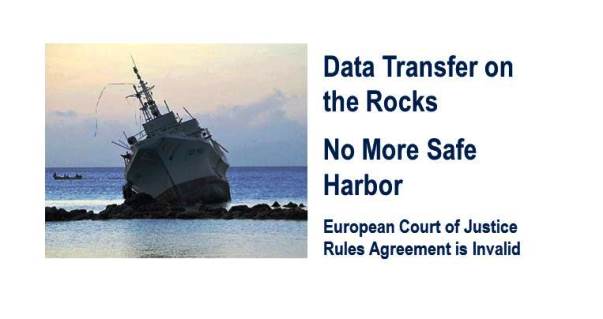 For info latest update on the EU DPR below. As expected the Parliament, Commission and Council are looking at the Regs in respect of the recent ruling on Safe Habor. I will provide an update after Commissioner Jourova speaks at the LIBE Committee.

Today, 12 October 2015, MEP Jan Philipp Albrecht presented the state of play of the GDPR trilogue before the Committee of Civil Liberty, Justice and Home Affairs (LIBE) of the European Parliament.

Mr Albrecht said that, in light of the landmark judgement on the Safe Harbor case, negotiators will review chapter V, regarding transfer of data to third countries, to assess in how far changes will be needed to reflect the conclusions of the Court of Justice of the European Union.

In addition, he confirmed what Ms Laure Wagener from the Luxembourg Presidency already told ACCIS last week, that overall negotiations are proceeding according to the envisaged schedule and that Parliament and Council agree on approximately 70-80% of the text. Nevertheless, a few more political issues remain unsolved, especially concerning Chapters II, III and IV and more precisely on data minimisation, lawfulness of processing, the appointment of data protection officers, sanctions and others. Mr Albrecht mentioned that the open questions will be re-discussed between October and November, while new chapters will be open for discussion as scheduled.

No questions or comments have been posed by other MEPs, showing that the EP is quite united in its position.

It is also important to notice that Ms Wagener, From the Luxembourg Presidency was present at the meeting and on a discussion concerning the implications of the Safe Harbor judgement, stated that in light of the recent developments and of the uncertainty they created with regards to the sharing and the protection of data, it is even more important to ensure that the negotiations on the GDPR will reach a final agreement by the end of the year.

On 26 October 2015, Justice Commissioner Jourova will be heard by the LIBE Committee on a number of topics, including the Safe Harbor case and the GDPR.

Source:  Neil Munroe, Member of the BIIA Regulatory Committee.  Neil can be reached at: neilm@crsinsights.com