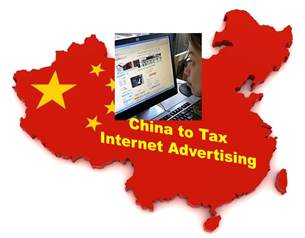 China’s State Administration for Industry & Commerce last week issued new rules on the classification of Internet ads. From September, paid searches will be treated as Internet advertising for the first time and that revenue could be subject to an additional 3 percent tax.

Such a move could force Baidu to cut its earnings for fiscal 2017 net income to 16.3 billion yuan ($2.4 billion).  That’s about 4 percent below the average of estimates compiled by Bloomberg.  About 50 percent of Alibaba’s revenue in the first quarter would be affected, suggesting a 2.4 percent hit to earnings, he wrote.

Alibaba said that if its pay-for-performance ads were charged a 3 percent fee, the impact of on its margins would be in the “low single digit” range as its revenue channels are becoming more diversified, according to an e-mailed statement. Whitney Yan, a spokeswoman for Beijing-based Baidu, said in an e-mail that the company would fully implement the new regulations.

The issue was flagged in Baidu’s April 20-F filing to the Securities and Exchange Commission. At the time the company wrote that it made substantially all its revenue from online marketing services, including “pay-for-performance, or P4P, services.