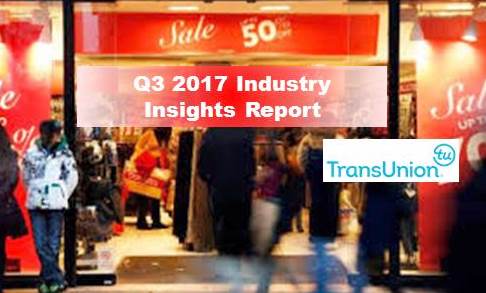 As Black Friday Nears, a Record 196 Million Consumers Now Have Access to Various Forms of Credit Cards and Other Revolving Lines of Credit

With the holiday shopping season officially kicking off during Black Friday next week, TransUnion’s (NYSE: TRU) just released Q3 2017 Industry Insights Report found that 195.9 million consumers now have access to revolving credit such as bank-issued and private label credit cards. According to the report, powered by PramaSM analytics, this is the highest level of revolving credit access since TransUnion began measuring the variable and is greater than the 192.6 million consumers who had access to such credit products in Q3 2016.

TransUnion also found that, as of Q3 2017, a record 142.5 million consumers had a balance on non-revolving loans. This is up from 140.1 million in Q3 2016. Non-revolving loans are primarily comprised of auto loans, mortgages, student loans and unsecured personal loans.

The number of consumers with the aforementioned credit products, especially revolving lines of credit, will more than likely grow during the upcoming holiday shopping season. In November and December 2016, TransUnion found that average originations for private label credit cards doubled for online (2.00x) and discount store (1.95x) retailers compared to average monthly originations over the rest of the year (January through October)

“The third quarter of 2017 exhibited a lending market that continued to operate in a stable manner, with consumers continuing to gain access to credit and take advantage of that access,” said Ezra Becker, senior vice president and head of research and consulting for TransUnion. “However, we are beginning to see a slowdown in originations, which may be a signal of saturation in the lower-risk credit tiers and some pull-back in lender risk appetite in the higher-risk tiers.

“Despite the slowdown, we anticipate a robust holiday shopping season. The University of Michigan’s consumer sentiment measure rose 4% this September compared to last, demonstrating that consumers have continued positive expectations regarding the overall economy. As a result, we expect this will lead to strong consumer credit activity during the upcoming holiday season.”

TransUnion’s analysis found that average private label card originations in the holiday season (defined as November and December) for 2016 was 148% of the average monthly originations in the January through October timeframe. This is tracking in line with recent rises observed in 2015 (156%) and 2014 (164%). “On average, consumers are about 1 ½ times more likely to open a private label credit card in the holiday season compared to any other month of the year. Much of this increase is due to the credit offers extended by retailers and their lending partners in anticipation of the shopping season,” Becker added.

To read the full press lease please click on this link.