Nikkei to Buy the Financial Times in a Landmark Deal 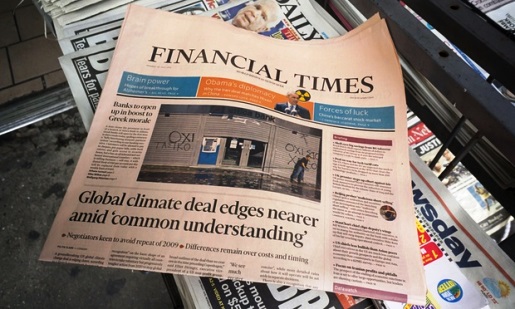 The Japanese media group Nikkei has agreed to buy the Financial Times from Britain’s Pearson (PSON.L) for $1.3 billion, putting one of the world’s premier business newspapers in the hands of a company influential at home but little known outside Japan.

In 2014, FT Group contributed £334m of sales and £24m of adjusted operating income to Pearson. At 30 June 2015, FT Group had gross assets of approximately £250m.  The deal, struck after Nikkei beat Germany’s Axel Springer (SPRGn.DE) to the prize, marks the biggest acquisition by a Japanese media organization and is a coup for the employee-owned firm which lends its name to the main Japanese stock market index.  In the Financial Times it has acquired an authoritative global newspaper that commands strong loyalty from its readers and has coped better than others with the shift to online publishing. It was one of the first newspapers to successfully charge for access to its website.

Established in 1884 and first printed on pink paper in 1893 to stand out from rivals, the FT has employed some of the leading figures in media and politics, including Robert Thomson, Chief Executive of News Corp (NWSA.O), former British finance minister Nigel Lawson and Ed Balls, an adviser to former British prime minister Gordon Brown.

Ken Doctor*, an analyst, stated: Why sell the one part of the company that has recently fueled the most growth? Pearson’s Professional group, of which the FT is the major driver, turned in a 10× better job of profit growth than its other divisions. So why sell it and be left only with its education businesses, in self-acknowledged rehab?

Ken Doctor also commented on the price earnings ratio: “… the FT Group generates £334 million ($518 million) of sales and £24 million ($37 million) of adjusted operating income.  That’s a multiple of 43×, or a price 10 times what an average U.S. daily, large or small, would sell for today. That multiple puts in the FT in a class by itself — as perhaps it should be. As I’ve emphasized in my tracking of the FT’s digital transition over the past decade, the company stands as the world’s news publishing leader. With more digital revenue than print and more reader revenue than ad, it’s crossed over.”

Nikkei and the Financial Times have cooperated for some time, making it easier for Nikkei to pay a substantial premium to protect its interests.  This may also be one of the reasons why the staff at the FT applauded the deal in preference over German based Springer.  Mathias Döpfner, the CEO of the Springer Group and the man who likes to ban Google from Europe, thought he had the FT in the bag.  When he received the bad news, he appeared to be mortified (FT commentary: ‘How the FT falcon flew into the Japanese news group’s nest – July 25/26 issue’).

*Ken Doctor is a news industry analyst and the author of Newsonomics: Twelve New Trends That Will Shape the News You Get (St. Martin’s Press).