Nova Credit in the News 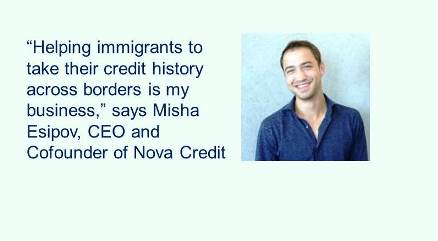 Described as an Alternative Credit Agency in this article, Nova Credit Lets Immigrants Bring their Credit History With Them

Millions of immigrants enter the United States lacking something important for success: a documented financial history or credit score. Unable to prove their reliability to lenders, they find it harder to rent an apartment, lease a car, or get their first credit card. A lack of credit score hobbles immigrants as they try to get a footing in American life. It’s not only poor immigrants who experience inconvenience and hardship, says Misha Esipov, cofounder of an alternative credit scoring startup called Nova Credit.  Even people with decent scores in their home countries become “credit invisibles” once they arrive here–consumers who can’t prove their viability to the mainstream U.S. financial system.

“The databases are structured differently around the world, they have different standards. But, at the end of the day, they’re capturing substantially the same thing. It’s a positive or negative about a consumers’ credit information,” Esipov says.

About 26 million Americans have no credit histories with one of the big three credit bureaus (Equifax, Experian, and TransUnion), according to 2016 figures from the Consumer Financial Protection Bureau. A further 19 million consumers are “thin file” or “stale file,” meaning their records are either incomplete or too old for the purposes of working up a FICO, VantageScore, or another credit score. Blacks, Hispanics, and people with low incomes make up the largest proportions of these groups.  Esipov says 10 million immigrants are credit-invisible because they’ve only recently arrived in this country and haven’t yet built histories of paying cell-phone bills and electric charges. Much of this second group may, in fact, be quite creditworthy, if someone can prove it, he argues.