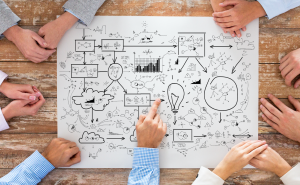 Consortium startup R3CEV today announced it is working on a distributed ledger that might otherwise be considered a blockchain, but which the company made perfectly clear is anything but.

Far from the permissionless ledger of transactions popularized by bitcoin, R3‘s technology, called Corda, claims to be tailor-made for financial institutions. The only information that’s decentralized is whatever the members choose is necessary.

In a blog post published today, R3’s chief technology officer and the man in charge of the project, Richard Gendal Brown, described one of the key differences between Corda and what most people in the industry think of when they imagine a blockchain.

“We are not building a blockchain. Unlike other designs in this space, our starting point is individual agreements between firms…  We reject the notion that all data should be copied to all participants, even if it is encrypted.”

Other key differences include that the developers of Corda, who include chief engineer James Carlyle, and lead platform engineer Mike Hearn, focused from the beginning on the legal language around how disputed agreements are resolved and on concerns unique to regulated financial companies.

“We need to make it easy to write business logic and integrate with existing code,” wrote Brown, who was hired from IBM in September to lead the project. “We need to focus on interoperability and we need to support the choreography between firms as they build up their agreements.”

Unlike bitcoin’s blockchain which distributes the entire history of transactions among its nodes, Brown highlighted that in Corda only verified transactions are shared.

Regulators are given “supervisory observer nodes” from which they can monitor the system, a functionality that is being built into blockchain systems, including Overstock’s tØ platform.

Bloomberg reported that R3’s consortium members, who participated in creating the tool, will be testing Corda over the coming weeks. In the coming months the company plans to release the core of the platform as open source, “possibly as a contribution to other endeavours,” according to the blog post.