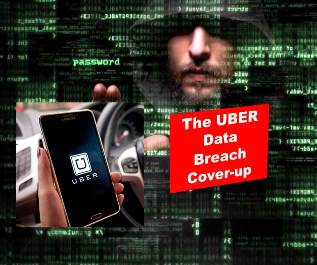 Uber concealed a massive global breach of the personal information of 57 million customers and drivers in October 2016, failing to notify the individuals and regulators, the company acknowledged on Tuesday 21st November.

Uber confirmed it had paid the hackers responsible $100,000 to delete the data and keep the breach quiet. Uber also disclosed that hackers had stolen 57 million driver and rider accounts and that the company had kept the data breach secret for more than a year after paying a $100,000 ransom.

Hackers stole personal data including names, email addresses and phone numbers, as well as the names and driver’s license numbers of about 600,000 drivers in the United States.  The company said more sensitive information, such as location data, credit card numbers, bank account numbers, social security numbers, and birth dates, had not been compromised. The deal was arranged by the company’s chief security officer and under the watch of the former chief executive, Travis Kalanick, according to several current and former employees who spoke on the condition of anonymity because the details were private.

The security officer, Joe Sullivan, has been fired. Mr. Kalanick was forced out in June, although he remains on Uber’s board. The two hackers stole data about the company’s riders and drivers, including phone numbers, email addresses and names, from a third-party server and then approached Uber and demanded $100,000 to delete their copy of the data, the employees said.

Uber acquiesced to the demands, and then went further. The company tracked down the hackers and pushed them to sign nondisclosure agreements, according to the people familiar with the matter.

To further conceal the damage, Uber executives also made it appear as if the payout had been part of a “bug bounty”, a common practice among technology companies in which they pay hackers to attack their software to test for soft spots. The details of the attack remained hidden until Tuesday. The ride-hailing company said it had discovered the breach as part of a board investigation into Uber’s business practices.

The handling of the breach underscores the extent to which Uber executives were willing to go to protect the $70 billion ride-hailing giant’s reputation and business, even at the potential cost of breaking users’ trust and, perhaps more important, state and federal laws. The New York attorney general’s office said on Tuesday that it had opened an investigation into the matter.

Dara Khosrowshahi, who was chosen to be chief executive of Uber in late August, said he had only recently learned of the breach. “None of this should have happened, and I will not make excuses for it,” Mr. Khosrowshahi said in a company blog post. “While I can’t erase the past, I can commit on behalf of every Uber employee that we will learn from our mistakes. We are changing the way

we do business, putting integrity at the core of every decision we make and working hard to earn the trust of our customers.”