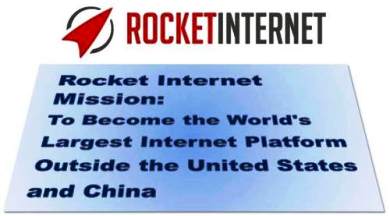 The Berlin-based startup incubator by the illustrious name Rocket Internet has set the price range for its initial public offering, which could value the company as high as $8.4 billion (6.5 billion Euros.)  Following in the footsteps of Alibaba’s recent IPO Rocket Internet has an ambitious mission to become the world’s largest Internet platform outside the United States and China.

Rocket could sell as many as 37.9 million shares, or 24% of the company, between the range of $46.50 (35.50 Euros) to $56.40 (42.50 euros) per share.  Assuming that Rocket offloads all of those shares, which includes an over-allotment or “greenshoe” option, the company and selling shareholders could raise up to $2.1 billion (1.6 billion euros) if they sell at the high point of the predicted range, according to Forbes.

CEO Oliver Samwer stated in a recent interview:  “We have built a unique platform that has allowed us to take internet business models to over 100 countries today, bringing basic goods and services to our diverse customer base. Taking our company public is the next step in our journey to build the world’s leading internet platform outside of the United States and China.”

Founded in 2007 by Marc, Oliver and Alexander Samwer, Rocket Internet was created to establish e-commerce and online retailing companies in places that the three brothers saw as underserved markets. Often mimicking the business models and designs of American companies, Rocket has established more than 75 firms around the globe including Zalando, which was built initially as a European model of American online shoe retailer, Zappos.   Rocket Internet will be listed on the Frankfurt Stock Exchange’s entry standard under the ticket “RKET” and said it could start trading as early as Oct. 9.

Will it fly like a ‘rocket’?  The FT opined in its Lex Column on September 25th that “it’s gonna be a long, long time”.