Rocket Internet Runs Out of Steam 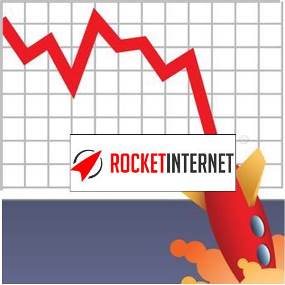 According to a recent article in the FT shares in Rocket Internet fell sharply, after the Berlin-based tech investor said it would take longer than planned for some its key portfolio companies to swing into profit. Some investors also voiced disappointment that the group failed to provide clarity on how and when it would deploy its €1.6bn cash pile. The shares closed more than 5 per cent lower at €19.84.

Rocket, a bellwether of Germany’s start-up scene, had promised investors that three of its companies would be in profit by the end of 2017. That goal had now been pushed back by a “couple” of quarters, the group’s finance chief said.  Oliver Samwer, co-founder and chief executive, said the group had made big strides towards profitability in the nine months to October, pointing out that aggregate losses narrowed from €642m in 2016 to €44m this year. But he also highlighted the need for additional investment at key portfolio companies, citing the recent expansion of meal-kit delivery service HelloFresh into the US.

Founded in 2007 by the three Samwer brothers, Rocket is one of the most high-profile companies to have emerged from Berlin’s fast-growing start-up scene. It has set up and backed dozens of internet commerce sites and marketplaces in the years since, often by copying existing business models from the US and Europe and setting up similar companies in other parts of the world.

Rocket has scored some notable successes, from online retailer Zalando to HelloFresh and food delivery company Delivery Hero. The last two were floated on the stock market this year, boosting the group’s already strong cash position.

Nevertheless Rocket has long attracted critical scrutiny from investors and analysts, a number of whom have raised questions over the valuation the company has attached to some of its portfolio businesses. More recently, Rocket has also faced questions from fund managers and analysts over the use of its cash — and demands to return more of it to shareholders.