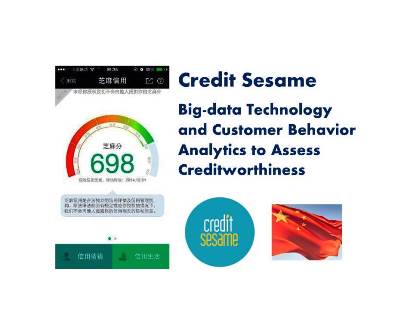 Sesame Credit Management has been accused for turning credit scores into a game – It is said that the regulator, the People’s Bank of China will not play.

According to press reports the People’s Bank of China has frowned upon some of the tactics a firm related to Alibaba Group Holding Ltd. recently used to promote its individual credit scoring service, amid criticism that they are inappropriate.

Sesame Credit Management Co., a subsidiary of Alibaba-linked Ant Financial Services Group, was one of the eight companies the central bank chose this year to run individual credit scoring services that up to recently had only been provided by the China’s Credit Reference Center.

Sesame provides users of Alipay, the country’s most popular online payment service, a score ranging from 350 to 950 based on data collected from Alibaba’s shopping websites as well as banks and other companies that agree to share information with Sesame Credit. The higher the score, the more trustworthy a person is considered.

Sesame has been promoting the service mainly through cooperation with other companies, such as hotels and car rental firms. Consumers with high credit scores can book rooms or rent cars without leaving a deposit.  People with highest credit scores can also pay for certain purchases only after they decide they are satisfied with it.  Sesame recently struck a deal with the Consulate General of Luxembourg to use credit scores for screening Chinese citizens applying for visas to enter ‘Schengen Countries’ via Luxembourg.   Experts have questioned the legitimacy of using such benefits to attract customers, but the People’s Bank of China as the regulator had been largely silent on the matter – until recently.

One Sesame promotional campaign that caught the regulator’s attention allowed people with a credit score of 750 or higher to enjoy fast check-in through a VIP channel at Beijing Capital International Airport. Industry sources estimate that less than one in 1,000 of Alipay’s 400 million users have a credit score of 750 or higher. An employee from the payment company said the number is small, but he did not reveal it.

Sesame intended to extend the offer from September 15 to October 14, but had to cut it short after the central bank told it to stop, people close to the regulator said. It has promised to remove all related advertising at the airport but keep the channel open only people who have already used it.

The people close to the People’s Bank of China,  which is the regulator, has also told Sesame it disapproves of the way the firm advertised its service in another promotional campaign, which involved nearly 30 million students in more than 3,000 colleges and universities around the country, from September 9 to 24.  Students were challenged to take part in games that compared their credit scores with friends, classmates and people from other schools. Competitions were also held between universities, and winners were promised a total of 5 million yuan in cash rewards.

One of the sources said the regulator believes these operations are “against standards and norms.” He did not say what those standards and norms are, but indicated that the central bank would soon release a regulation, the first of its kind in the country, on how individual credit information should be gathered and used.

The article also quoted Lai Jinchang, IFC (World Bank Group) expert on financial infrastructure, who pointed out that there are standards and laws in many countries, which govern how data should be collected and used for calculating credit scores, and such scores cannot be used at will.  Many of the benefits Sesame has used to attract customers are simply not permitted in other countries.

BIIA editorial comment:  Regulations on credit reporting in China are quite specific in what can be collected or not.  However when the law was contemplated in 2008 the concept of big data combined with predictive analytics, plus the use of social media was not on the regulator’s ‘radar screen’.  Time has moved on and so has technology.  Based on the above expressed sentiments it would be helpful to have more specific guidelines in reference to the use of social media in credit scoring and the use of scoring instruments in financial marketing.