The March of the Machines: Transforming Services & Professions 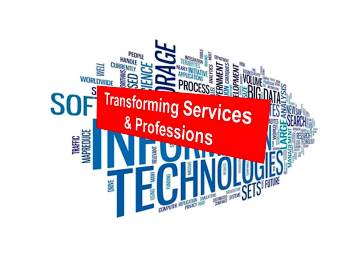 The world stands on the brink of a 4th industrial revolution, not just about manufacturing or automation but transforming services & professions. Rapid advances in a host of technologies, including artificial intelligence, 3-D printing, robotics, Big Data and data science, genetics, medical imaging and computer vision are combining to alter almost every profession and every industry in potentially radical ways.

Tasks that were once thought to be the exclusive province of the human mind, from driving trucks on busy highways to drafting legal documents to analyzing medical research, can now be carried out by software, thanks to artificial intelligence and big data analytics. This may result in massive leaps forward in economic productivity and better, longer and more fulfilling lives for billions of people.

But these changes are also profoundly disruptive, with the ability to obliterate the existing corporate order and displace tens of millions of workers.  Among those whose jobs are at risk are knowledge workers in professions, such as accountants, lawyers and doctors, who never had to worry about automation before.

The speed at which these changes are coming may mean that people have less time to adapt to this brave new world and learn new skills.