Thomson Reuters in $3.55bn Divestiture of IP and Science Business 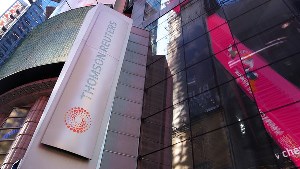 The news and data provider’s IP and science business provides intellectual property, scientific information and other tools to subscribers.  Its portfolio includes brands such as MarkMonitor, Web of Science, Thomson CompuMark and Thomson Innovation.

Specialist business publishers and data companies have been the subjects of big transactions in recent years, as private equity groups seek stable revenues and profits in increasingly volatile markets.

Analysts said the purchase of Thomson’s IP and science business was also part of a wider push into China and Asia, where there has been a big spike in the levels of investment in scientific research.

The business accounted for just 8 per cent of its total revenues in 2014 and, under chief executive Jim Smith, the global information company has been looking to prioritise its three principal divisions which provide information and data to the financial and risk, legal and accounting industries.

Thomson Reuters said it expected to use about $1bn of the proceeds to repurchase shares, as part of a previously announced $1.5bn buyback program.  The rest is expected to be used to pay down debt and reinvest in the business.

As announced previously Thomson Reuters is narrowing its focus to its core financial business with the $3.55bn divestiture of a specialist science and intellectual property division to private equity.