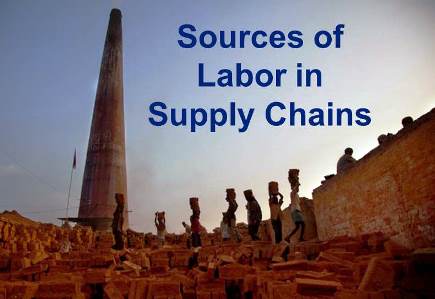 Thomson Reuters announced new partnerships with two of the world’s premier anti-slavery organizations to turn the power of data analytics onto corrupt labor brokers and people traffickers.  Companies and financial institutions can become unwitting participants in slavery due to a lack of understanding of their suppliers, partners or contractors: although they may have a thorough understanding of their immediate contractors, sub-contractors may expose companies to further risk.

Verité, a nonprofit organization dedicated to ensuring that people around the world work under safe, fair, and legal conditions, is working to help leading companies assess and analyze the trafficking risk associated with labor brokers used by their subsidiaries, suppliers and contractors to source staff. As part of this effort, Thomson Reuters is partnering with Verité to provide expert guidance and data analysis to uncover the links between labor trafficking in supply chains and other crimes such as corruption.

Liberty Asia, which is dedicated to providing a more effective and coordinated response to slavery, is collaborating with Thomson Reuters on data and information gathering about human trafficking and modern slavery. Thomson Reuters and Liberty Asia will also work together to train analysts and investigators in gathering this data.

For companies, these analyses will help ensure the integrity of their supply chains at a time when their activities are under increased scrutiny. Particularly in developing countries, manufacturers need to demonstrate compliance with local labor laws but in a growing number of countries – such as the United States and the United Kingdom – there is an additional requirement to be compliant with international anti-trafficking protocols and national laws in order to be able to export goods to them.

“It is astonishing that more than two centuries after the United Kingdom outlawed slavery that this practice can endure across the world,” said David Craig, president, Financial and Risk, Thomson Reuters. “It is reported that the ‘cost’ of a slave is lower now than it has been for three centuries – a genuinely chilling thought.

The new partnerships were announced today at the inaugural Trust Forum Asia in Hong Kong, organized by Thomson Reuters and the Thomson Reuters Foundation. The event brings together more than 200 financial and legal experts, government, academics, activists and NGOs to discuss the exploitation of domestic labor and the widespread use of displaced, impoverished and trafficked individuals in Asia’s fishing industry.

Last week in London the Thomson Reuters Foundation brought together some of the world’s leading financial institutions with law enforcement agencies to establish a working group which will combat human trafficking and modern day slavery.

Last November, Thomson Reuters announced at its fifth Pan-Asian Regulatory Summit in Hong Kong that for every new World-Check customer it would make a donation to the Thomson Reuters Foundation to fight modern slavery and exploitation. Thomson Reuters has now donated some $50,000 (US) to fighting slavery and the program is on track to double this amount by the end of 2015.