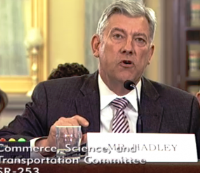 Tony Hadley, Senior Vice President, Government Affairs and Public Policy at Experian and BIIA’s chair of its regulatory committee is confident that Congress won’t set rules for how online marketers use information about consumers.

During a recent conference held by the Technology Policy Institute in Aspen, Colo., Tony Hadley, senior vice president for government affairs and public policy for Experian, said industry standards, not legislation or regulation, should determine how companies collect and use information about Internet users for marketing purposes.

“Should marketing data be regulated like credit, like employment, like lending data?” Hadley asked, referencing sector-specific laws that address sensitive information like financial and health data.  “I think the clear indication that we’re getting from Congress is no.”  He held up five fingers, saying, “There might be this many members of Congress that want to go in this direction.”

Pushing back on calls for a sweeping consumer privacy law in a “big data” era where companies can collect, analyze and share large amounts of information about consumers, he pointed to the state and federal rules that companies like Experian already have to follow.

Experian complies with 300 state and federal laws, he said. “The idea that there’s a lack of data regulation and that one more law, the 301st law, will bring sense to consumers … is something that I think is questionable.”

Instead of a new law, he pointed to industry standards.  “We’re not going to see law passed in this area, but that doesn’t mean that we shouldn’t be mindful of best practices,” he said. Hadley also touted the benefits of “big data” practices, such as using related but unregulated financial data to “create financial identities where none exist,” especially in the cases of low-income consumers who have not had the chance to build their credit.

While a lot of focus has been put on the harms that can come from companies using unregulated data to discriminate against low-income consumers, “I think there’s real opportunity in using big data analytics for financial inclusion,” he said.

In recent months, government officials have highlighted the potential harms and benefits of companies’ ability to use a constantly-growing amount of data about users, including in a report from the Federal Trade Commission and two reports from groups of White House advisers.

Marjory Blumenthal, executive director of President Obama’s Council of Advisers on Science and Technology, which prepared one of the White House reports, said technologies that use large amounts of data about consumers can have positive and negative consequences.

“Part of what your hearing is that the technologies themselves can go either way,” she said, appearing on the panel with Hadley.  “You need the legal framework to make sure that the use of the data … promotes the more positive outcome.”  Maureen Ohlhausen, a Republican on the Federal Trade Commission stressed the value of report’s like the FTC’s. “I think it’s important for us as policymakers to think about [the potential harms], but to try to get to the right balance,” she said, adding that “it’s a lot easier to write a report than to get legislation passed.”