Transparency at Bay:  Another Disaster for Fiji – This One Man Made? 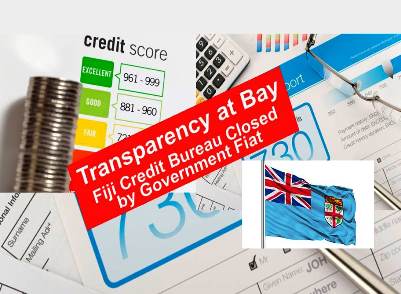 Fiji Credit Bureau Closed by Government Fiat without Prior Public Consultation. Lending Community is Perplexed – Lending to Individuals and Businesses Likely to be Impaired

On Tuesday the 26th of April the Minister for Finance announced  that the Government was moving to pass a Bill which would regulate credit reporting agencies in the country and advised that the Bill would be debated on Wednesday the 27th, the very next day.

Neither the Bureau, the lending community or the Reserve Bank of Fiji, the proposed regulator, were consulted (nor were they aware of the Bill prior to the press release) notwithstanding the fact that the bureau had commenced discussions with the RBF around the process of introducing comprehensive positive reporting and the supporting regulatory regime.

The only hint of a likely change came in form of a press release in December 2015 by the Attorney-General and Minister for Finance, Aiyaz Sayed-Khaiyum, who announced that the Government would be analyzing the operations of the Fiji Data Bureau and looking at its legality. “We will be in the New Year looking at the whole basis of the Data Bureau itself and why and how should all other financial institutions use it,” he revealed. The Minister went on to say in part that “We will ensure that in the next one year or so there will be some new laws that will be put in place to ensure this is regulated. There needs to be certain rules around this and there needs to be legal recognition of such an organization”.  Neither further announcements nor consulting was forthcoming.

The Minister Mr. Sayed-Khaiyum in his address to Parliament said that the Bill provides relief to ordinary Fijians to enable them to access credit from various sources through fair and proper reporting of their information.  Every Fijian has a right to privacy regarding his or her credit information.

Despite requests by the opposition, the Bureau, and the Association of Banks for public consultation on the Bill the Parliament elected to use urgency and passed the Bill.

As a consequence of the new law the Data Bureau has elected to close its operation at this time and is reviewing its position. The Bill is yet to be gazetted and it is understood there are no regulations in place to outline the process or rules for anyone wanting to apply to operate a bureau in Fiji.

The Bureau in support of consultation claimed that:

“It has continued to operate not only within the law but beyond, complying with International Best Practice and meeting the standards set by the World Bank”.

“Our members always act with their customer’s consent and we have always had a strict and fair dispute procedure”.  “Since commencement we have had in excess of 1,000,000 searches which form the basis for an accurate historical record and we have had less than 30 complaints”

“We do not object to being regulated, but we do take strong objection to the manner in which this regulation is occurring without any consultation and also some provisions of the proposed Act which we believe will make it impossible for us or anyone else to operate a Credit Bureau in Fiji”.

The Association of Banks in Fiji expressed their concerns and said that “while this Bill “clears the slate” for many people, it also clears the very good credit records of those vast majority of responsible borrowers”

“The inability now to be able to search a person’s credit history will greatly increase the risk levels within the personal lending market. Lenders will have little option but to increase interest rates to compensate for this increased risk. Banks have already been contacted by borrowers in arrears stating that if there is no Data Bureau, there see no need to pay back their loans. Banks will have no option but to pursue legal action through to bankruptcy to enforce payment of these loans. Processing times for loans will now increase as banks ask borrowers to provide evidence of having paid off loans in the past”

“At this time when those affected by cyclone Winston may be looking to borrow funds to rebuild, loans will be more difficult to obtain and interest rates higher.”

Background:  The Data Bureau Ltd was established in 2001 by local investors using the expertise and software systems of Baycorp Advantage (now known as Veda). As part of the set up the company spent more than a year establishing a code of conduct, a comprehensive membership agreement, proof of compliance and in doing this, worked closely with the Reserve Bank of Fiji (RBF). This process was followed as there was no privacy or other legislation supporting (nor preventing) the establishment of a bureau. The new operation closely followed New Zealand’s acknowledged best practice at that time and imbedded those in all its practices and procedures. All of the Bureau’s documentation, consent and dispute resolution procedures were signed off by all the registered banks and other prominent lenders legal advisors and the Reserve Bank of Fiji.  This was a requirement of all local Banks (the majority of which operate in both NZ and Australia) before they would join as members.

The Bureau took several years to build up its database because it was only able to load any information where there was the consent of the borrower.

Data Bureau has been working closely with the International Finance Corporation (World Bank Group) as it supports the expansion of credit reporting in the Pacific. Since the establishment of Data Bureau in Fiji, a similar model has been used to establish bureaus in PNG, Solomon Islands, Vanuatu, and Tonga and is currently underway in Samoa. It is not known what impact this overly onerous action will have either on those bureaus or the IFC’s regional Pacific Bureau project.

It can be safely assumed that the act will have severe negative impact on the economy as a whole and in particular on the ability to rebuild the infrastructure of Fiji post cyclone Winston.  While the APEC region is moving towards Financial Inclusion, the Fiji government opted to go into the opposite direction.

Data Bureau Limited is a member of BIIA and as such BIIA has offered its full support going forward.