Transparency at its Best: Panama Papers Database Open to the Public 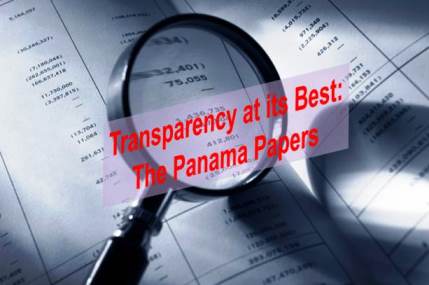 Is your name on it?  You can find out by yourself …

The body behind the Panama Papers revelations is to make an enormous database of financial data public.

The International Consortium of Investigative Journalists (ICIJ) has launched a new database allowing members of the public to look at some of the leaked data themselves. It contains some 200,000 entries on offshore bodies, taken from the enormous leak which sparked political turmoil across the globe.

The journalists involved in the leak have so far closely guarded their source data, but now plan to let ordinary people see parts of it. The ICIJ claims the details represent the largest ever release of secret offshore companies and the people behind them.  The original details were leaked ultimately from Panamanian law firm Mossack Fonseca, the fourth biggest offshore law firm, and passed to German newspaper Sueddeutsche Zeitung.

They contain information about companies, trusts, foundations and funds incorporated in 21 tax havens, from Hong Kong to Nevada. It links to people in more than 200 countries and territories.

When the new data is released next month, users will have access to Mossack Fonseca’s internal records of a company’s true owners. The interactive database will also include information about more than 100,000 additional companies that were part of a previous ICIJ offshore leaks investigation carried out in 2013.

The ICIJ said the new data will be “a careful release of basic corporate information” in the public interest. It will not include bank accounts details or financial transaction records. Emails, correspondence, passports and telephone numbers will also be withheld.

The database is published at offshoreleaks.icij.org
Source: Cyber Security Intelligence