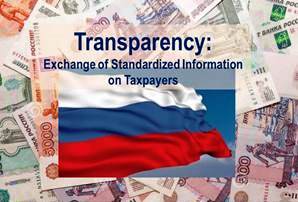 Important Facts:  On May 12, 2016 Russia became the 81st signatory of a multilateral agreement on the exchange of standardized information on taxpayers between tax authorities of countries being signatories of the agreement.

Implications: The exchange of financial information will become effective in 2018 relating to financial data of 2017.  According to the Minister of Finance of the RF: “… it will be difficult in future to hide income from the Russian tax authorities …”

Background:  The exchange of financial and tax information between countries has become paramount.   Subsequently at the G20 meeting the finance ministers of the participating countries approved the automatic exchange of financial data already in June 19, 2013.  Therefore the Federal Tax Service of the RF (FTS) can receive financial information from the tax authorities of other countries.   In addition alternative data sources, such as banks, depositories, brokers, financial investment vehicles, insurance companies, would be available.

The information which will be received from the above mentioned foreign sources (tax authorities as well as banks, depositories etc.) includes data on Russian residents, owning a business abroad, and also data on individuals:

The implementation of the project of automatic exchange of tax information takes place simultaneously with the G20 / OECD* project concerning the fight against the tax base erosion and the diversion of profits (OECD Action Plan on Tax Base Erosion and Profit ShiftingBEPS Plan)). This project is aimed at the disclosure of the information on Controlled Foreign Companies (CFC), the tightening of the rules of profit taxation of such business entities, the avoidance of double «non-taxation», the resolution of tax issues which are prevalent in the digital economy.  In addition, the plan includes a review of requirements on transfer pricing of financial transactions and of companies’ documentation within the control over transfer pricing.

The signing of the above mentioned multilateral agreement is part of a set of measures aimed at ‘de-off-shoring’ of assets and is a logical continuation of the capital amnesty valid till July 1, 2016. As of today 7,000 Russian legal entities and individuals have informed the Russian FTS about their business presence abroad within the implementation of the CFC Act and this capital amnesty – thus a business which owns assets abroad has less than two months to declare their foreign assets free of fines. As practice shows, this process is slow and tedious. Mainly medium-sized business and individuals located in transparent jurisdictions disclose their foreign assets.  On such assets it is not required to pay taxes in Russia. However, most of large companies took the position of waiting and hope the disclosure of their foreign assets will not happen.  But by approving the automatic exchange of tax information, the G20 countries agreed to impose sanctions on countries that do not participate in the exchange of such data. Probably, this can also explain the approval of the new anti-offshore “black list” of 111 countries by the Russian FTS: the profit of a CFC located in jurisdictions on this list will not be exempt from taxation, according to the Russian legislation. Thus long-term the prospects of making large companies transparent are positive.

The Information and Analytical system Globas-i® http://www.credinform.ru/en-US/globas can assist in the identification of Russian companies whose owners are located abroad.