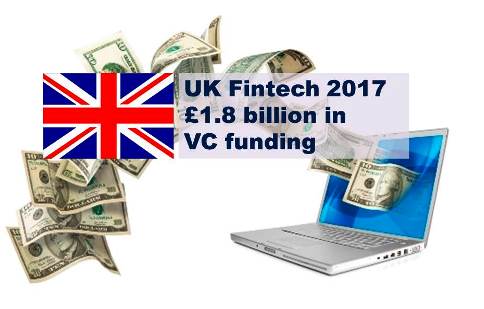 Venture capital investment in UK fintech firms more than doubled in 2017 to reach $1.8 billion, with 54% of the total coming from overseas VCs who appear largely untroubled by the UK’s imminent break from the European Union.

The figures, compiled by Innovate Finance from PitchBook data, portray a healthy landscape for the UK fintech industry, with new regulations around Open Banking and GDPR oosening the purse strings of venture capital investors.

The UK attracted 224 deals in 2017, raising investment levels by 153% over the previous year when $704 million was bet on the sector. The top two UK deals, TransferWise and OakNorth, both raised rounds of over $200 million and were ranked among the top 20 global deals.  Of the total 2017 UK VC investment, 24% went into challenger banks, followed by money transfer and FX (21%), alternative lending/financing (17%) and personal finance/wealth management (11%).