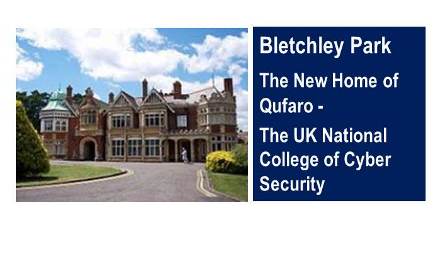 How befitting:  Bletchley Park, the home of the Enigma codebreakers, is set to become the home of the UK’s first ever National College of Cyber Security.  It is said that their efforts shortened World War II by two years.  We, information professionals, hope that this new initiative will shorten the war on cyber-crime.

The college, which is being created by a new cyber security body called Qufaro, will open in 2018 once a £5m restoration of buildings on the Bletchley Park site is complete. Aimed at 16 to 19-year-olds, the college will be free and selected on talent alone.

Alastair MacWillson, chairman of Qufaro, said: “The cyber threat is the real threat facing the UK, and the problem it’s causing the UK government and companies is growing exponentially. “There is a shortfall in terms of the professional resources to combat this right now and it will get so much worse unless there is a programme to get to grips with it.” He added there is a shortfall of around 700,000 cyber security experts across Europe.

Cyber threats are of looming risk to Britain, and played a major part in the US Election, amid accusations Russia and US ended up locked in a “cyber war” after a string of hack attacks. ISIS cyber hackers have in pass access databanks of military personnel and published them as “kill list” to encourage lone terror nuts.

Straight-up crooks are also a threat amid warnings they could hack hospitals and hold patients to ransom, and potentially takeover nuclear power plants unless more is done to boost the UK’s cyber defenders.

MacWilson added: “Our cyber education and innovation landscape is complex, disconnected and incomplete putting us at risk of losing a whole generation of critical talent. “For those interested in forging a career in cyber, the current pathway is filled with excellent but disparate initiatives – each playing a vital role without offering a truly unified ecosystem of learning and support.

“By connecting what already exists and filling the gaps, Qufaro will make it easier for budding professionals to grow their cyber security skills at every stage of their journey, and contribute more to the sector as a result.”

Background:  Bletchley Park was home to the team of scientists who helped crack Enigma code and win World War 2 for Britain. Secret codes were used by the German military to encrypt their messages for their army, air force and navy.  Mathematician Alan Turing led a team of scientists to cracking the Nazi code and was invaluable in helping win the war.  Following in Turing’s footsteps, Bletchley Park is now set to be reopened as a place where Britain’s brightest students can become the nation’s next line of defence in the