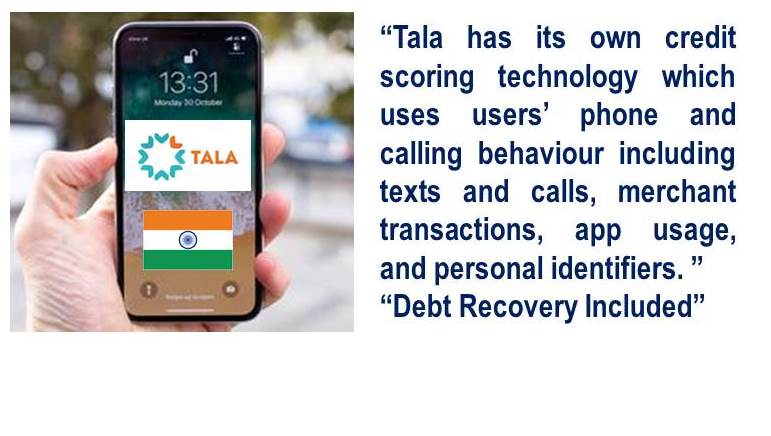 California-based fintech company Tala said that it is bringing its lending app to India. This expansion was announced along with a new $50 million Series C funding led by Revolution Growth its operations in the country which is already in progress.

The company said in its statement that it also recently raised an additional $15 million to power its loan book and that the round brings Tala’s total financing to around $105 million.

Tala was founded in 2012 by Siroya, who grew up in India and the United States and has a background in global health, microfinance, and investment banking, including with the United Nations Population Fund, Health Net, Citigroup and UBS. The US-headquartered Tala, launched its lending app in Kenya first in 2014, and then expanded to Tanzania, Philippines, and Mexico last year.  Now it plans to use fresh funding to expand in India.

Tala has its own credit scoring technology which uses users’ phone and calling behaviour including texts and calls, merchant transactions, app usage, and personal identifiers. These signals serve as a proxy for traditional financial data, helping Tala expand credit access to customers with little or no formal financial history.

A bunch of technology platform has joined the lending space off lately in the country. Tala will compete with players like NeoGrowth, Paytm-backed CreditMate, CASHe, LendingKart, MoneyTap, EasySalry, Faircent, LoanMeet amongst others. Note that, the Reserve Bank of India (RBI) had come out with final guidelines in October 2017 for peer-to-peer (P2P) lending platforms, according to which P2P lending companies will be regulated as non-banking finance companies

The guidelines add that, the platforms will have to provide assistance in disbursement and repayments of loan amount and render services for recovery of loans originated on the platform.