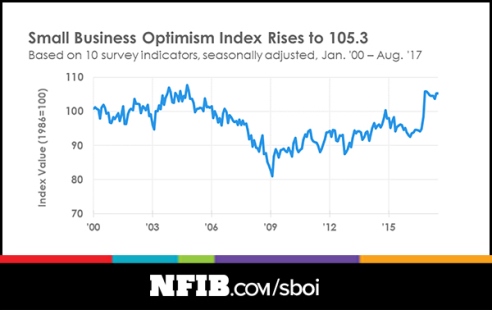 A surge in capital spending and high sales expectations have caused a streak of historically high performances dating back to November to continue in the Index of Small Business Optimism from the National Federation of Independent Business (NFIB).  The percentage of small-business owners who plan to make capital expenditures in the near term is at its highest level since 2006.

“This is a sign of economic health that we’ve been expecting based on the soaring optimism that began last year,” said NFIB President and CEO Juanita Duggan. “Higher optimism resulted first in higher employment activity, and now we’re seeing more small-business owners making capital investments. Consumer demand is very strong, and the regulatory relief has been dramatic. Small-business owners still expect progress on tax reform and health care, and they will be watching closely.” The index rose 0.1 points to 105.3. Five of the components of the index rose while five declined. Those planning capital outlays were highest among professional service firms (46%), followed by manufacturing (38%).

“Small firms are now making long-term investments in new machines, equipment, facilities, and technology,” said NFIB Chief Economist Bill Dunkelberg. “That’s a real sign of strength, and it will be interesting to see if the August result becomes a trend.”

Those expecting better sales in August increased by 5% to a net 27%, which matches the number of owners who believe factors are favorable for expansion.