US / European Union Safe Harbor Deal Still on the Rocks 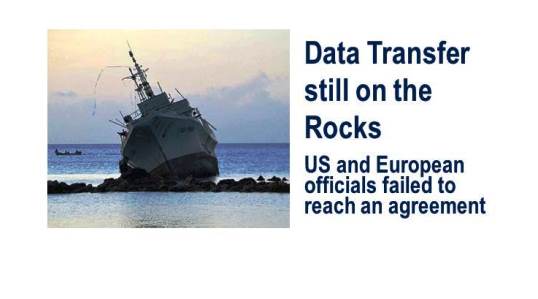 American and European officials failed on Sunday to reach an agreement over how digital data — including financial information and social media posts — could be transferred between the two regions.

Despite last-minute talks, which included high level officials such as Secretary Pritzker meeting with Andrus Ansip, the European official in charge of the region’s digital agenda, the two sides remained far apart on specific details required to approve a comprehensive deal.   European and American officials had until Sunday evening to meet a deadline set by Europe’s national privacy agencies, some of which have promised aggressive legal action if the current negotiations founder. Those agencies will publish their own judgment on how data can be moved safely between the two regions on Wednesday.

With time ticking down, the two sides are now hoping to agree to a broad deal before European national regulators act on Wednesday, according to several officials with direct knowledge of the talks, who spoke on the condition of anonymity because they were not authorized to speak publicly.  Still, negotiators said sticking points remained — including over how Europeans’ data would be protected from surveillance by the American government and how Europeans could seek legal remedies in American courts — and neither side could guarantee the final outcome.

To read the full story click on this link:  New York Times,