US Postal Service Toys with Cryptocurrency and Blockchain Applications 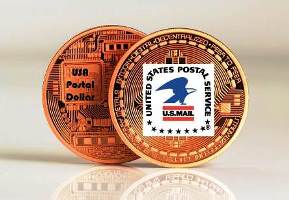 The US Postal Service (USPS) has released a new report outlining how it could adopt blockchain technology within its operations.

The report, issued by the Postal Service’s Office of the Inspector General (OIG), suggests that the service should consider using the technology to reinforce its supply chains, create connected device networks or even issue its own digital currency.

It’s an idea that has drawn attention from similar services in the past. In March, Australian delivery service Australia Post said it was investigating using the technology for digital identity applications.  In a statement, Postal Service chief information security officer and VP of digital solutions Randy Miskanic further suggested that the government hasn’t done much beyond evaluation.

“As highlighted in the report, we will need to be cautious in specific implementations to account for technology barriers, security concerns and regulatory uncertainty,” he said. “We will evaluate the use of blockchain for each of the use cases and further review the available opportunities while considering the impact of the technology and financial restrictions.” A ‘Postcoin’ for global payments

One notable recommendation is the creation of a cryptocurrency for the Postal Service itself.

The cryptocurrency, dubbed ‘Postcoin’, was initially proposed in a 2015 paper by Switzerland-based consultancy Swiss Economics. Swiss Economics was later hired by the OIG as part of its research.

According to the OIG report, Postcoin could help the service alleviate global money transfer problems. Further, the report’s authors speculate that an in-house cryptocurrency would make it easier for globally connected postal offices to transact with one another directly.

“…the Postal Service currently offers international money transfers. However, these services are currently only cashable in a limited number of countries. The flexibility and convenience associated with the Postcoin could potentially allow the expansion of electronic money transfer services to anyone in the world.”

Notably, the report suggests that the Postal Service could use a public blockchain like bitcoin’s for this application.

Possible avenues of deployment explored include buying tokens for an existing blockchain or using a form of watermarking to denote which ones are Postcoins. Alternatively, the Postal Service could bootstrap an entirely new blockchain instead, the report suggests.

“One option is to “buy in” to an existing, public blockchain. A postal operator would first have to acquire some coins. Once the post owns the coins, it could add an additional layer of information to each coin, or fraction of a coin, to mark it as representing a specific and distinct asset — in this case, a Postcoin,” the report explains.

The main justification: the Postal Service would effectively inherit a system of miners who collectively process and validate transactions on the blockchain.

“The advantage of buying into an existing and already widely used platform is that the post does not have to foot the bill for the costs to maintain the validation system or to secure the payment network,” the report states.

Another possible application suggested by the OIG could see the Postal Service connecting its network of delivery trucks by way of a blockchain.

“Imagine if postal vehicles and sorting equipment could manage their own tracking, monitoring and maintance[sic],” the report’s authors write. “For example, a vehicle could monitor the performance of its brake pads, determine when one is about to wear out, find out if that part is still under warranty, create a contract with the manufacturer to install a replacement part, and then pay for the brake pad and service – all autonomously.”

The OIG speculated that it could cut maintenance spending by as much as 7% through the creation of a mechanism by which connected vehicles could self-report any mechanical problems.

A federal audit released earlier this year reported that the Postal Service is wasting millions of dollars annually because of inefficiencies in its vehicle maintenance operations. According to the report, the Postal Service could start looking into using the technology for supply chain monitoring. This would be accomplished, the OIG suggests, through the use of sensors and blockchain smart contracts to trigger cash releases along the supply chain’s lifecycle.

“Using blockchain to manage interactions between these different entities could speed up shipments, particularly international ones,” the report’s authors state, going on to write:

“Each mailpiece, whether a parcel or letter, could be uniquely identified on a blockchain and have the ability to create transactions, allowing for the timely sharing of information and processing of payments.”

While the report acknowledges that “it would currently be prohibitively expensive to tag every piece of mail with a sensor”, the OIG indicates that the Postal Service could use its market heft to encourage adoption in the long-term.

“This application would allow the Postal Service to keep an auditable chain of custody and embed additional shipment and tracking information to facilitate customs clearance and faster delivery,” the report concludes.

The full OIG report can be found here