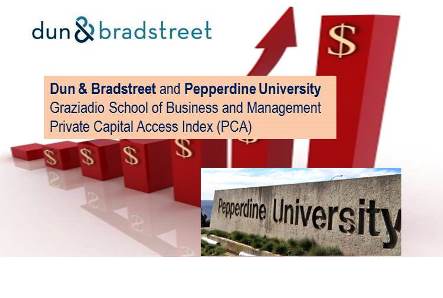 Small businesses are starting the year on an optimistic note, with business’ confidence about future growth at a five-year high, according to recent results from Dun & Bradstreet and Pepperdine University Graziadio School of Business and Management Private Capital Access Index (PCA). The PCA shows 86 percent of small business owners reported feeling “more optimistic” or “somewhat more optimistic” about their own future business growth prospects.=

In addition, 62 percent of owners of small businesses (with revenues under $5 million) are planning raises for employees in the next 12 months, and 80 percent of mid-sized businesses (with revenues between $5-100 million) expect to increase their employees’ pay – a three-year percentage high for both business segments. Conducted between February 2 and February 19 of this year, the PCA report is derived from 2,469 completed responses from small and mid-sized businesses across the U.S.

Businesses Remain Positive About Their Own Future: Thirty-seven percent of business owners reported plans to seek financing in the next six months, compared to 30 percent in Q1 2015, representing a year-over-year increase of 23.3 percent.

Among respondents who anticipate a demand for financing, 65 percent cite planned growth or expansion as their reason, while 60 percent cited growth due to expected increased demand. Both percentages were at the highest rates in the past four years.

“Increased access to capital and positive projections about revenue growth are key indicators that the business environment will remain stable for much of 2016,” said Jeff Stibel, Vice Chairman of Dun & Bradstreet. “The newest findings suggest that business owners are increasingly optimistic, paralleling positive growth trends in wages, manufacturing, housing construction, and consumer spending. The favorable outlook may be attributed to other positive factors as well, such as lower unemployment and decreased gasoline costs, leaving consumers with more discretionary income.”

A Growing Number of Small Businesses Are Cautious About Future Business Environment:  Despite being generally positive about their own operations and future growth prospects, the PCA report suggests some businesses find the current economic environment restricting.

Half of all businesses (50 percent) surveyed also reported their ability to hire new employees was restricted, a four percent increase from the same time a year ago. The study also shows an increased percentage of business owners who transferred personal assets to their businesses in the last three months, a slow increase that began in 2014.

“Business owners may be responding to the uncertainty in a presidential election year, or may be concerned about the slowdown in the Chinese economy, the devaluation of the Japanese yen and the impact of international fiscal policies on the American economy,” said Dr. Craig R. Everett, Director of the Pepperdine Private Capital Markets Project.  “Regardless of the reason, their cautious approach to financing business operations may reflect a hopeful, but at the same time, wary view of the 2016 business environment.”