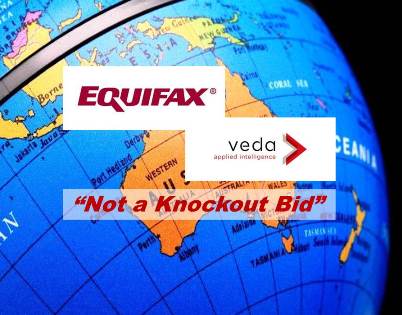 A day ago we covered this late breaking news:  Equifax in AUS$2.28bn bid for Veda.

One of Veda Group’s largest shareholders, Hyperion Asset Management, said Equifax’s $2.3 billion takeover offer for the data analytics group was “not a knockout bid”, and urged the Australian company to take a long-term view for shareholders when considering the deal.  “In relation to the price, it’s not a knockout bid given the substance of the company,” Joel Gray, portfolio manager at Hyperion Asset Management, said.   “I think it’s not a complete surprise that Veda is under takeover. It’s got very high barriers of entry to the business.

“These type of quality businesses don’t come around that often, so it has to be a fairly attractive offer to part ways with it.”   Hyperion is Veda’s second-largest shareholder and owns just over 8 per cent of the group.

Analysts also noted the bid potentially undervalued Veda because changes to Comprehensive Credit Reporting that were implemented in March 2014 could yet provide a further boost to revenue and earnings.  Bankers close to the company say Equifax sees the present price as good value because Veda stands to benefit when the big banks finally begin pouring mountains of extra data into its credit bureau under the new comprehensive credit reporting rules, which came into effect in March 2014.

Veda is one of the latest Australian companies to come under mergers and acquisitions scrutiny by offshore suitors following a fall in the equities market and local currency.  Offshore bids for Australian companies are hovering at their highest levels in nearly half a decade, as a 20 per cent fall in the Australian dollar and plunge in the share market tempt global players to make a move.