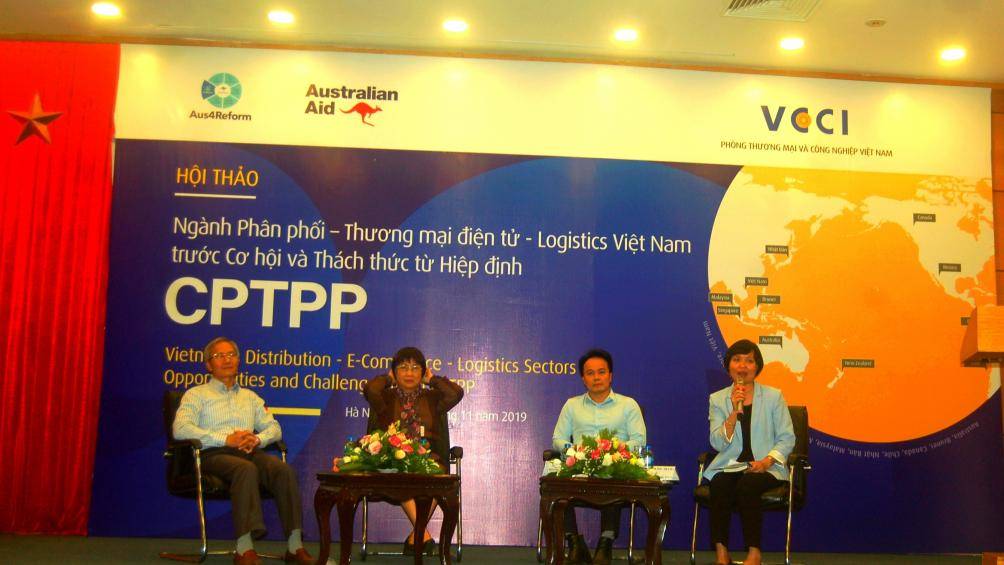 Vietnam has never committed to opening air transport services, including domestic and international air transport for foreign investors, even with the World Trade Organization (WTO) and the EU-Vietnam Free Trade Agreement (EVFTA).  However, for the Comprehensive and Progressive Agreement for Trans-Pacific Partnership (CPTPP), the “door” has been opened.

As a member of CPTPP, Vietnam has opened its door to the aviation industry for foreign investors. “This is the first time Vietnam has made a commitment to open this market for foreign investors,” according to a report at the conference “Vietnam’s Distribution, E-commerce, Logistics sectors / Opportunities and Challenges from CPTPP”, taking place on November 25. Specifically, Vietnam pledges to receive investment from CPTPP countries in the field of air transport services under the form of capital contribution or share purchase of a Vietnamese airline.

According to Ms. Nguyen Thi Thu Trang, Director of the Center of WTO and Integration, Vietnam Chamber of Commerce and Industry (VCCI), this is a very open commitment because Vietnam has never committed to opening air transport services including domestic and international air transport for foreign investors from members of WTO and EVFTA.

By allowing capital contribution and share purchase of a domestic airline, Vietnam has opened the door for CPTPP investors to aviation services that a Vietnamese airline is allowed to provide, including all activities from passengers, goods and postal items transport by air.

Vietnam’s aviation market is highly appreciated with a growth rate of 10% per annum. This figure is twice as high as that of the region and the world, not only for passenger transport but also for logistics. The International Air Transport Association (IATA) assessed that Vietnam is the fifth fastest growing aviation market in the world, reaching 150 million passengers by 2035.

The “airspace” in Vietnam is becoming increasingly cramped as many new brands are entering the market. Most recently, Viet Nam Tourism Transport and Marketing Joint Stock Company (Vietravel) has announced its completion in issuing VND 700 billion of bonds to prepare capital for the on-going aviation project.

Meanwhile, Vinpearl Air has not yet informed the details of its operation plan, but the registered charter capital is expected to be VND 1,300 billion. The enthusiasm of domestic investors and the commitment to open aviation services for foreign investors made many people worried about the overload of aviation infrastructure, especially that of Tan Son Nhat Airport.

Regarding these concerns, Ms. Trang said that the greater the demand, the more favorable for the development of the service industry. This benefits the economy and consumers. “It is not the airspace but the ground and the legal basis that have not enabled aviation services to really take full advantage of its potential” Trang said and took an example: to be granted permission, airlines must have adequate infrastructure and qualified airports.

Tan Son Nhat Airport is currently no longer able to accommodate more aircraft, so airlines will have to set up bases in airports of other provinces. Therefore,

the problem here is that the infrastructure and mechanism have not yet developed in line with the growth of the industry.