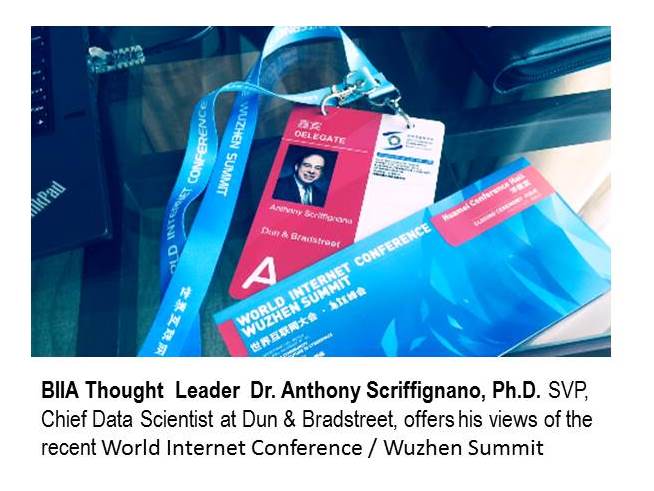 Toward the end of last year, I was asked to attend the second annual World Internet Conference as a delegate and forum panelist. The invitation came as somewhat of a surprise. This event, organized by the Cyberspace Administration of China and the People’s Government of Zhejiang Province is big… very big. I was told that the event would be kicked off by President Xi Jinping (it was) and would be attended by world leaders (it was), major tech company CEO’s and senior executives (there in large numbers) and representatives from governments around the world including the US (it was).

Dun & Bradstreet is a name that is very well known in business information, but increasingly the reputation extends to the relevant capabilities to curate and understand information in complex, ever expanding, web-enabled business contexts. The opportunity to represent the organization on a world stage struck me as exciting, but also pivotal. We had an opportunity to speak to those assembled as a thought leader on critical topics relating to the future of risk decisions in a big data context (e.g. “Fintech”), cyber security, and related issues. The event was also a wonderful holding environment for numerous ad hoc and planned meetings to share thoughts in a more intimate setting with key thought leaders, lawmakers, and other senior executives from China and many other countries.

To put this event in context, consider that there were thousands of volunteers supporting the roughly 2000 delegates and guests. The amazing ancient water city of Wuzhen (think Venice, but thousands of years older) was shut down completely and dedicated exclusively to the conference. The event was an opportunity for tech companies to discuss their visions and products as well as a large trade show. There was extensive media coverage including live simulcasting during the event. I would encourage anyone interested to do a web search and read some of the reactions, interpretations, and reflections. (Here is a very good piece from our colleagues at Apco

Here are just a few of my reactions:

On world leaders’ views: similar, but not the same: President Xi laid out his guiding principles regarding the Internet very clearly, leading to a series of recommendations regarding the right of countries to regulate within their borders, the risk of some countries being marginalized if they do not have participation in the creation of standards, and the obligation to avoid taking steps on the internet to regulate at the expense of other countries. Following were a series of world leaders including Russian prime minister Dmitry Medvedev, Pakistan prime minister Nawaz Sharif, Kazakhstan prime minister Karim Massimov, Kyrgyzstan prime minister Temir Sariyev, Tajikistan prime minister Kokhir Rasulzoda and others. Normally, I find such prepared remarks tedious after a time, but somehow this was not the case at Wuzhen. The speakers did not all agree. Some, for example were much more focused on security and cyberterrorism and willing to put the free flow of information to stimulate commerce second. Others were deeply concerned with marginalization. All were hopeful that the Internet could be a positive enabling force in the development of global economy.

From a Data Science perspective: Xeno was right. Thousands of years ago, the Greek philosopher Zeno put forth a series of paradoxes to essentially “prove” that motion is impossible (you may recall the race between the tortoise and the hare, where the tortoise starts ahead and the hare, who continually halves the distance between himself and the tortoise but can never get ahead because there continues to be “half” of the decreasing distance to cover). Speaking to some of the representatives from technology startups and governments from smaller countries in Africa and Asia, I was struck by the fact that many are caught in a race to “catch up” while more advanced others continue to experience unprecedented growth and breakthroughs from the perspective of internet enabled commerce. If we look at the data that is available in some countries, we see the same thing. Data availability continues to improve, but the business practice and available infrastructure continue to present barriers to a sort of “data availability” equality, even as the technology and environment into which these markets must compete continues to advance.

From a cultural perspective: walk another 5 meters. It was cold in Wuzhen – very cold. Upon entering the various venues, there were volunteers at coat checking stations. One morning, I had an early morning meeting and I checked my coat at one of these stations. A volunteer gave me a check token, which was large and round – easy to keep track of. I was being briefed by a colleague about the meeting I was about to have, so I will admit I wasn’t paying much attention to the whole coat-check thing. As I got to the elevator only a few steps away, I realized I couldn’t find my coat-check token. Searching my pockets, I said in frustration to my colleague “I can’t stand this sort of thing – I only walked five meters and already I seem to have lost my coat check!” As the doors to the elevator opened, a Chinese gentleman who had been standing nearby stepped into the elevator with a playful smile, saying “walk another five meters.” Of course, the humor was brilliant, but I cite this as a little mini example of the sort of thing that was happening everywhere. People who had no real common language made the best of what they knew, sometimes pulling together groups of others to help in the communication. The metaphor for the broader context of the Internet, which has common protocols but certainly not a common language (English is becoming less prevalent in many spheres), is unmistakable.

During the formal presentations and panel discussions, comments were simultaneously translated into Chinese, Russian and English. One might think that this translation creates parity, but it doesn’t. These three languages have very different ways of expressing tense, number and gender, and possession to name but a few nuances. I was very careful during my panel discussion to speak in a way that was as easy as possible to translate. Several people commented to me that they noticed this in the way that translations seemed to get “better.” Conversely, listening to others speak in English, for example, and then to the Chinese translation I could hear that a lot was getting lost if the speaker was not so careful. Watching the interplay of culture and language among a group that was trying very hard to communicate with one another, I couldn’t help reflect on how much more difficult the situation is in the global sphere of internet-enabled commerce, where competition is often based on exploiting differences rather than trying to create parity.

From an analytics perspective: I know where you got your shoes. There is an old street trick where a con artist bets passers-by that he can tell them where they got their shoes just by looking at them. The con artist snatches up the money, saying something like “I’ll tell you where you got them – you got them on your feet!” The lesson here is that anyone can make a prediction in the absence of information, but that doesn’t make it valuable. If we think about the inequality of presence on the Internet of world countries, the marginalization that can happen if we are not extremely careful, and the limited analytics that are possible when only macroeconomic or regional information is available, we can start to see the very real implications of some of the concerns discussed at Wuzhen.

My recommendations to the delegates:

I won’t belabor this short piece with all of the advice I gave in my panel at the Wuzhen Summit, but I will share three things that seemed to resonate well in the moment and in the media.

I hope that this brief reflection on the World Internet Conference inspires you to read more about the event and to think about some of the very big issues that were addressed. It is easy to criticize world events – even easier if we do not take something from them and carry it forward in a positive way. I recently read a wonderful quote from Abraham Lincoln, “We can complain because rose bushes have thorns or rejoice because thorn bushes have roses.” They didn’t have an Internet in Lincoln’s day, but I think that is a great way of thinking about the possibilities.