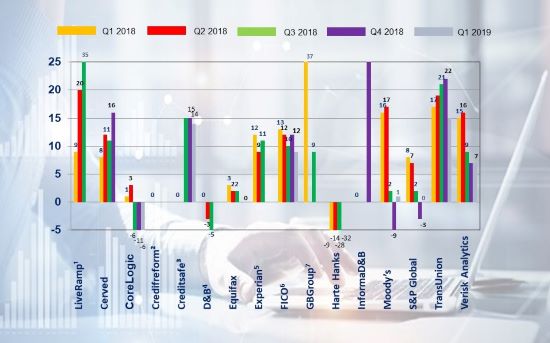 As of May 15th, all major credit bureaus and information companies have reported Q1 2019 results.

Equifax suffers from the fallout of the data breach of 2017 its revenue growth rate is down 2%.  In conjunction with the 2017 date breach Equifax took a $690 million charge in Q1 that includes its estimate of losses it expects to incur in connection with a potential global resolution of the consumer class action cases and the investigations by certain federal and state regulators.  Since the announcement of the cybersecurity incident in September 2017, Equifax has incurred a total of $1,352.0 million of costs related to the incident, incremental technology and data security costs, and an accrual for losses associated with legal proceedings and investigations related to the 2017 cybersecurity incident.

TransUnion’s double-digit growth rate continues to be buoyed by acquisitions made in the prior year. TransUnion has become one of the most acquisitive credit bureaus having made 9 acquisitions in the past two years resulting in double digit revenue growth for every quarter in 2018. Noteworthy are its acquisitions of iovation (identity and fraud management) and Callcredit.  In addition TransUnion has made strategic investments in Fintech companies:

Payfone, an award-winning digital identity authentication leader, has announced the closing of a $24 million funding round led by TransUnion (NYSE: TRU), a global leader in information solutions, with participation from existing investors Synchrony (NYSE: SYF), a premier consumer financial services company and others.  TransUnion’s investment in Payfone underscores a new strategic partnership that will leverage the two companies’ complementary missions and capabilities to accelerate the global digital economy.

Dashlane, a popular password manager and all-round identity management solution, has raised another $30 million in funding, the company announced. The funding — this time a round of debt financing from Hercules Capital — follows prior investment from FirstMark Capital, Rho Ventures, Bessemer Venture Partners, TransUnion and Silicon Valley Bank.

Tru Optik, the leader in over-the-top (OTT) targeting, measurement, and privacy management, announced the close of a $10 million venture round led by Mithera Capital. Additional investors in the round include TransUnion, Connecticut Innovations, Arab Angel Fund, and Progress Ventures.

Verisk Analytics made 8 acquisitions in the past two years concentrating on data and analytical solutions in niche markets to boost insights of every conceivable risk sector. D&B has been taken private and no longer discloses company results. 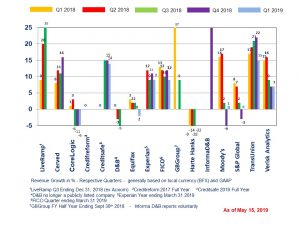