What the Heck is Blockchain? 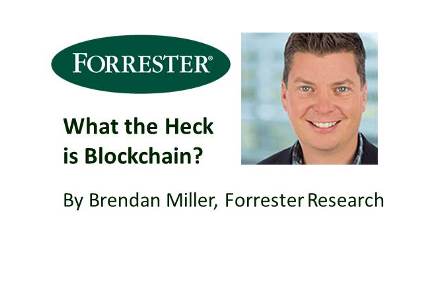 Whenever the term Blockchain comes up in conversations with information professionals, usually one will be interrupted with the question:  “What the Heck is Blockchain”?

So what the heck is Blockchain?   At its core, blockchain is a shared database or ledger technology for managing and recording transactions with no central authority. Instead of a bank or other intermediary, computer algorithms and consensus among multiple computers provide verification and authentication without outside tampering. Specifically, blockchains enable users to move value across one public ledger instead of across many individual private ledgers, providing unprecedented transparency and democratized oversight. Blockchains are a type of distributed ledger. “Distributed ledger” is a general term, often used interchangeably with blockchain. There are multiple distributed ledgers with varying blockchains (Bitcoin blockchain now being one) that are public and private. Blockchains compromise a number of components (see illustration).

Blockchain is already beginning a long-term evolutionary shift of trust from central organizations to decentralized consensus organizational models, creating a new wave of innovation for collaboration, connecting, and transacting.

Blockchain and Distributed Ledgers Warrant the Attention of eBusiness Professionals

He also explains that you need to:  Lay Out A Methodical And Reasonable Blockchain Road Map for Your Organization

eBusiness leaders should use blockchain to solve internal inefficiencies and build internal competencies prior to looking outward at building complex consortiums. Address use cases that have the largest amount of friction first, and be clear on how blockchain is optimal in solving those issues.

Why this report:   Bitcoin’s moment in the spotlight is long gone.  Its cousin “blockchain” has dominated industry headlines over recent months — but how do we know that blockchain isn’t just another dud?

This report aims to separate the hot announcements from the hot air, answering eBusiness and channel strategy professionals’ key questions around what blockchain technology is and how

it’s being adopted, as well as how to implement it within their organization and what some of the key use cases are.