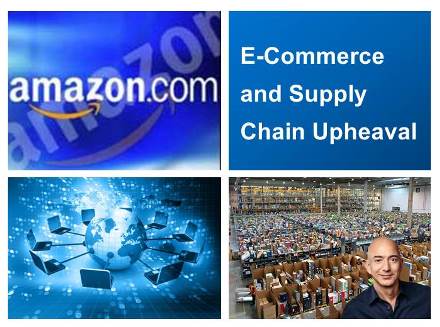 Amazon could strangle the competition in small business finance, but also all other third parties who are part of traditional supply chains.

Amazon has recently announced that it had surpassed $1 billion in small-business loans to more than 20,000 merchants involved in its Amazon Marketplace in the U.S. UK, and Japan during the past year. In fact, since Amazon Lending began in 2011, it has surpassed $3 billion in loans to small businesses. The company is making money from both the sales of products via its online platform and by charging interest on the loans.

It was not that long ago that going to the mall was an American pastime. In the past two decades, consumers bought into the convenience of shopping at home rather than making the effort to drive to the malls and battle for bargains. Furthermore, Millennials, the most populous age demographic in the country, have grown up making purchases on their smart phones. This change has hurt traditional retailers, such as Macy’s, JC Penney, K-Mart, and Sears, which have all announced store closings. Once a robust industry, the malls of America are dying.

A cause for concern is that Amazon has signaled in may move beyond lending to its own Amazon Marketplace merchants. Amazon’s entry into mainstream small-business lending would knock the small business banking industry for a loop. Amazon could disrupt small business finance in the same manner that it forever changed retail. The company started 22 years ago as primarily an online seller of books and CDs. Since that time, it has made more than $400 billion in sales and has become the No. 4 company in market capitalization.

Flush lots of cash to lend, Amazon fairly easily entered the lucrative small business lending marketplace. Currently, the company only offers short-term business loans ranging from $1,000 to $750,000 for up to 12 months to micro, small and medium businesses that sell on Amazon. It has the potential to expand into retail banking. Amazon could begin setting up deposit accounts or lending to small business borrowers outside of its own network. This could help Amazon grow its core business of online sales as well as establish the company as one of the leading online lenders to small companies. Eventually, Amazon could expand such operations to the other countries across the globe where it operates marketplaces. Think about the potential of moving into markets such as India and China.

“Small businesses are in our DNA. Amazon is providing capital to small businesses to help them expand inventory and operations at a critical period of their growth,” said Peeyush Nahar, vice president for Amazon Marketplace, in a company press release earlier this month. “We understand that a small loan can go a long way.”

Banks and other lenders should be nervous. The banking sector opened the door for alternative lenders, peer-to-peer lenders and marketplace lending platforms during the “credit crunch” that ensued after the Great Recession, which began in late 2007. Big banks, which long dominated small business lending, opened the door for other types of lenders. Thus, FinTech was born.

Amazon has huge advantages over all other players: size, name recognition, trust, and, enviably, being less-tightly regulated than banks. Having real-time data on sellers’ businesses and access to their customer online reviews helps minimizes credit risk.

Banks should be worried about Amazon’s possible expansion into small business lending. Many of them are saddled with the cost structure of the branch system and a pool or borrowers that prefer to conduct business on their phones. Today’s small-business owners like using the internet to conduct financial transactions via mobile platforms. This is not going to change. Millennials are more likely to pick up their smart phone to secure a loan than to walk into a branch of a big-name bank and start filling out paperwork.

Amazon’s bold moves should be a wakeup call for the banking industry. Many of them, including some of the largest financial institutions in the county, have been slow to invest in establishing online loan application platforms. Amazon Lending will impact not only banks, but also other online credit marketplaces for small business. If they don’t change, today’s lending giants could follow the same route as buggy whip manufacturers. Those that do not evolve could meet the same fate as traditional retailers that did not embrace online selling quickly enough. They quickly found out that they were unable to compete with the easy, competitive pricing, speed and service that Amazon offers.

BIIA Editorial Comment:  Many smaller companies are using Amazon and not to forget Alibaba, for marketing, sales, distribution and payment functions.  This already has implications on supply chains (elimination of jobbers, wholesalers and retailers) including trade finance and banking.  Furthermore the power of third party information suppliers will diminish in this new configuration.  This has negative implications for business information, credit insurers and the profession of credit management. Amazon’s bold moves should not only be a wakeup call for the banking industry, it impacts all current players who had their place in traditional supply chains.  Commercial credit information is no longer a growth business and credit insurance is stagnating.  A new ballgame is underway.

Recommended reading:  Why Hedge Funds Raising their Bets against US Shopping Malls