Singapore remains one of the most stable countries in the world. The People’s Action Party (PAP), which has been the main governing party since gaining independence from Malaysia in 1965, was re-elected in July 2020. Amid a COVID-induced economic slump, the PAP’s share of the popular vote slid to 61%, its second-worst result on record. However, there are no significant implications for political risk. Abrupt policy changes are unlikely, given the PAP´s still-strong mandate to govern and pass legislation. Prime Minister Lee Hsien Loong, son of the country’s founding father Lee Kuan Yew, has been in office since 2004 – but has indicated this term will be his last. The establishment of an official “Leader of the Opposition”, a newly instituted role in Singapore, is likely to strengthen checks and balances and lead to a more consultative form of governance that potentially improves accountability. The next general election must be called by 2025.

Singapore has the highest possible sovereign credit ratings from Moody’s, Fitch and S&P. Singapore’s large fiscal and external buffers are often better than those of other highly rated countries. Robust institutions and governance alongside effective policy implementation supports fiscal strength and broad financial stability, and provides plenty of scope to counter cyclical downturns and any long-term structural challenges.

Singapore entered a sharp recession in 2020 as a result of the COVID-19 pandemic. The government adopted highly expansionary fiscal and monetary policies to support the economy. It committed close to S$100 billion through five budgets in financial year 2020. That produced its largest budget deficit since independence. The fiscal measures targeted infrastructure projects that should boost long-term growth. The policy response helped the economy bounce back strongly in 2021, when it recorded growth of 7.6%, the fastest full-year growth since 2010’s record of 14.5%.

By May 2022, Singapore had fully vaccinated around 92% of its population. The high vaccination rate helped the country cope with a fresh wave of the pandemic in February 2022 with most of the cases proving mild, especially for those who were fully vaccinated. Cases have declined sharply since.

Singapore consistently ranks as one of the best economies in the world in which to operate. It ranks second out of a possible 190 economies on the World Bank’s ease of doing business scorecard, for example, only behind New Zealand. The republic excels in all areas of doing business, particularly enforcing contracts, protecting minority investors, starting a business, dealing with construction permits and paying taxes. The Singaporean government places a strong emphasis on implementing policies to enhance the business environment and encourage investment.

The country ranks in first place in terms of economic freedom, according to the Heritage Foundation. Although certain civil liberties remain restricted, the PAP has championed economic liberalization and international trade.

It is also one of the least corrupt societies in the world, ranking third in Transparency International’s (TI) 2021 Corruption Perceptions Index. Singapore is again the only Asian country ranked in the top 10. Singapore has tackled corruption decisively and garnered international recognition for its incorruptibility and clean public sector, according to TI.

Singapore benefits from excellent infrastructure, reflecting high levels of investment supported by years of political stability and economic prosperity. The country hosts superb transport links, for example, and its nationwide fibre network provides its citizens with among the fastest home internet speeds in the world.

The PAP won 83 out of 95 seats in the July 2020 election and will continue to dominate the political environment for the foreseeable future. The biggest opposition group, the Workers’ Party, had its best result to date, but emerged with just 10 seats. The next election is due by 2025.

In April 2022 Prime Minister Lee Hsien Loong announced that Finance Minister Lawrence Wong was in pole position to take over the premiership when Lee steps down. Lee announced that Wong will lead the PAP’s “fourth generation” or “4G” team, effectively making the 49-year-old the heir apparent to assume the top job whenever Lee, 70, calls an end to his career. Wong’s performance as co-chair of the city-state’s COVID-19 task force, along with his relatable image, impressed as the PAP seeks to attract a younger set of voters.

Lee, 70, has been in office for over 17 years and once said he had no desire to remain in office after reaching 70. No significant policy changes are expected when and if Wong does succeed the current prime minister.

The economy expanded by 7.6% in 2021, driven by the manufacturing, finance and insurance, and wholesale trade sectors.

Officials are forecasting growth of between 3% to 5% this year. The government said that global supply bottlenecks are expected to persist throughout the first half of this year, which could constrain demand in some of Singapore´s overseas markets. It added activity in industries exposed to tourism, aviation and consumers are expected to remain below pre-COVID levels even by the end of 2022. Further monetary tightening and a return to conservative fiscal policies this year will also contain growth.

In April 2022, the government began allowing quarantine-free entry for all fully vaccinated travellers – a significant step toward reviving Singapore’s hub-economy status. In March it also relaxed some domestic restrictions.

Preliminary data for the first quarter showed a 3.4% growth rate on the year. This marked a slower pace than the previous quarter when the economy expanded 6.1%. The easing of COVID restrictions should allow growth to accelerate gradually over the remainder of the year. Most private economists are forecasting growth of around 4%

A tight labour market and global pressures – such as the Ukraine war and supply bottlenecks – are fuelling inflationary forces in the Republic. The Monetary Authority of Singapore (MAS) has responded by tightening monetary policy. Rather than varying interest rates, the central bank manages policy by letting the local dollar rise or fall against the currencies of its main trading partners within an undisclosed band. In October 2021, January and April 2022, the central bank allowed the currency to appreciate so helping to contain import costs. In December 2021, the government also introduced new measures to cool the housing market. The MAS is expected to continue to tighten monetary policy over the course of 2022.

Singapore remains one of the best countries in the world to conduct business. Corporate default probability remains very low on average, and the banking system is strong. The two main banks, UOB and OCBC, are likely to see a moderate increase in non-performing loans in 2022, particularly in foreign operations but their overall health is robust with ample reserves and improved earnings this year. 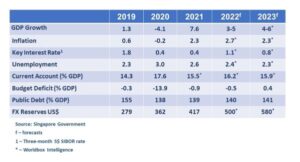