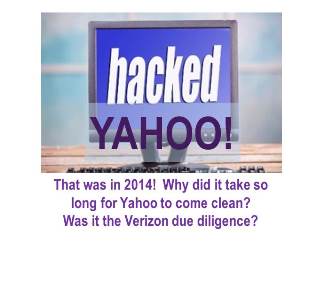 Yahoo recently revealed that 500 million of its customers’ accounts have been compromised following a major data breach. What happened?

So far, so unsurprising; barely a month passes these days without one of the world’s biggest companies confessing that the personal data of millions of its customers has been stolen or otherwise exposed.

What is striking about the Yahoo breach, however, is that it happened in 2014. The company’s CISO, Bob Lord, has issued advice on how users can reduce their exposure, but given that the announcement comes two years after the fact, the words ‘stable’, ‘door’, ‘horse’ and ‘bolted’ seem pertinent.

Here are the key details about the breach as explained by Yahoo CISO Bob Lord: “A recent investigation by Yahoo has confirmed that a copy of certain user account information was stolen from the company’s network in late 2014 by what it believes is a state-sponsored actor. The account information may have included names, email addresses, telephone numbers, dates of birth, hashed passwords (the vast majority with bcrypt) and, in some cases, encrypted or unencrypted security questions and answers.

A number of cyber security experts have issued their take on the revelations. The scariest thing in this case is that as yet, neither Yahoo nor its users are sure about what information has been compromised

The Yahoo hack serves as the greatest warning yet that personal email accounts are easy targets for hackers, putting their users at considerable risk of being subjected to cybercrime. The wider public is only just becoming wise to the fact that the more we use our personal webmail accounts for sending information about ourselves, the more information exists on the open internet that can be used against us by cyber criminals. This hack highlights how cyber criminals aren’t just after big companies, but individuals.

The scariest thing in this case is that as yet, neither Yahoo nor its users are sure about what information has been compromised. We need greater awareness to the threats that consumers face and education about what solutions exist to best protect ourselves by keeping our personal data safe.

The fact that Yahoo has now confirmed the breach is no surprise, the scale, however, is. The sad reality is this is the latest in a long list of organisations that have been caught napping when it comes to protecting customers’ data.

In fact as technology infiltrates every facet of our lives, we are only opening the door for these types of events to be both more frequent and by all likelihood more impactful.

Yahoo users should be particularly concerned that the stolen information includes security questions and answers as this could leave them open to far more than just their Yahoo email account being compromised. It raises the potential for accessing other accounts, including those with sensitive personal and financial information. Identity theft is a very valid concern for all the victims.

Keeping customers’ data secure should be a top priority for all enterprises. A determined hacker can be quite difficult to detect but organisations need to commit to hardening themselves to these types of attacks. This breach serves as a stark warning to all organizations that no company is too big or too small a target.

Yahoo users should change their passwords immediately and monitor activity closely. Also, they need to make sure they are using a new password that is complex, lengthy and, most importantly, ‘unique’. Since we know that password reuse across multiple accounts is very common, Yahoo users need to also ensure they are not using the same password as their Yahoo account on other accounts as well.

With the complex, data rich, IT environments organisations run today, there is always a high possibility of yet another breach with customer data making its way onto the dark web. As we continue to add more technologies to our networks and as attackers become more sophisticated, it’s important that organisations have a rapid process for determining the impact of the breach and a robust approach in addressing the ensuing post-breach fallout.

If you have a Yahoo account and have reused the password anywhere, it would be wise to create new ones now to stop any further personal data from being exposed. To reduce the impact from the next inevitable breach of this type, users should protect themselves by having individual passwords per service rather than the one or two most use now.

Despite many warnings, millions of users will still use very simple passwords like ‘1111’, ‘qwerty’ or their own names. According to Positive Technologies research, the password ‘123456’ is quite popular even among corporate network administrators: it was used in 30% of corporate systems studied in 2014. Hackers use the dictionaries of these popular passwords to ‘brute-force’ user accounts, so perhaps now is the time to employ a little creativity.

Yahoo does offer additional protection in the form of ‘account key’ and it would be prudent for users who continue using its service to employ this as a matter of urgency.

That this 2014 breach is only now coming to light raises serious concerns for Yahoo customers [editorial comment: Yahoo’s new owner Verizon and the SEC].