Yellow Pages: End of the Print Era in the UK 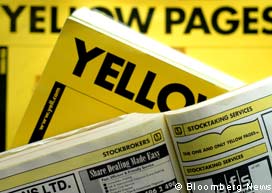 Yell’s print edition of the Yellow Pages directory is to be scrapped in the UK after five decades as a household stalwart.  Yell will deliver its final edition in Brighton in January 2019 as it focuses the classified business on a fully digital service.

The yellow books, which run to 104 local editions across the UK, were launched in Britain in 1966, with the first edition in Brighton. It became an essential tool for consumers looking for local tradesmen and service providers, but the rise of Google and Facebook as well as bespoke sites for tradesmen such as Checkatrade have reduced the need for printed directories.

Thomson Local was the first directory business to disappear when it went into administration in 2013. At that stage Hibu, the parent company of Yell, argued that there was still a dedicated audience for its printed directories.  BT, which used to own the Yellow Pages but sold the business for £2.1bn in 2001 to reduce debt, still publishes its own directory but could look to scrap the print edition in time, according to a person briefed on the situation.

Richard Hanscott, chief executive of Yell, said: ‘‘After 51 years in production Yellow Pages is a household name and we’re proud to say that we still have customers who’ve been with us from the very first Yellow Pages edition in 1966.  ” Yell will offer businesses a free listing on its yell.com online directory and tools to help small companies deal with online reviews.  It hopes to “help” 1m small businesses to get online by 2020. The move is part of a plan to revive the Hibu business that collapsed in 2013 and was taken over by its creditors.  The business had accumulated £4bn of debt taking over international rivals before buying a string of digital assets, including Moonfruit and Znode, that did not grow fast enough to offset the decline in the directories arm.