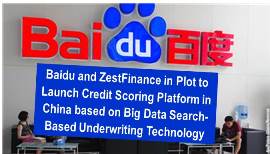 BIIA reported the story recently, however the writer of the story, James Rufus Koren, has added additional data to the story.

A handful of Chinese companies already judge creditworthiness based on the shopping and payment histories of their customers, but Baidu’s plan to use search data appears to be a first.

“Nobody’s ever been able to turn search data into credit data,” said Douglas Merrill, chief executive of ZestFinance, which also will get an equity investment from Baidu as part of the deal. Merrill would not disclose terms of the investment.

Aaron Rieke of consulting firm Upturn, which has tracked alternative credit scoring firms, said the deal, thanks to Baidu’s size, would mark the first time a company has taken such a vast amount of information about online behavior and used it to make credit decisions.  “They’re going to have a lot of data,” Rieke said. “It’s an important moment. Once you’re going to be judged by the byproducts of online activity, that’s a brave new world.”

ZestFinance, founded in 2009, specializes in scoring the creditworthiness of borrowers who have little or no credit history. The firm uses complex algorithms that look for correlations between creditworthiness and all kinds of nontraditional credit information.

In the U.S. ZestFinance makes consumer loans under the brand Basix, and judges customers based on a wide array of information gleaned from data brokers and other sources. In China, e-commerce site JD.com uses ZestFinance’s systems to underwrite loans to its customers based on their browsing and transaction history.

But the deal with Baidu takes things a step further, setting ZestFinance’s system loose on a trove of information about what consumers are looking for online, where they go and what they purchase through merchants on Baidu’s e-commerce platform. Though much of that information has nothing to do with money, Merrill said behavioral data can weed out fraud and produce solid credit information.

“If you get enough data about people’s behavior, you’ll be able to extract information about ability to repay and willingness to repay,” Merrill said.

Because of the vagaries of ZestFinance’s system, which may find correlations that are far from obvious, it’s difficult to say precisely how the Baidu scores will work.

For instance, in ZestFinance’s U.S. lending practice, Merrill has said that borrowers who fill out a loan application using proper capitalization are more likely to repay than those who use all capital letters — though Merrill also acknowledges he’s not sure why that is.

The deal with ZestFinance comes less than a year after Baidu and Chinese finance firm Citic Group announced plans to start a new bank, to be called Baixin Bank.

At the time, Baidu said that its search data could “help the bank understand the individual needs of customers.” Now, by working with ZestFinance, it’s likely planning to use that same data to help it underwrite credit cards, loans and other financial products for hundreds of millions of potential customers.

China’s consumer credit market is growing fast, but it’s still relatively small, and most Chinese consumers don’t have a traditional credit score.  In December, Fitch Ratings estimated about 35 percent of Chinese consumers — or about 350 million* out of an adult population of more than 1 billion — had a formal credit history. By comparison, about 89 percent of American adults have a credit record, according to the federal Consumer Financial Protection Bureau.

That gap has pushed other Chinese firms to look for new ways to estimate consumers’ creditworthiness.

Last year, Ant Financial, an affiliate of Beijing e-commerce giant Alibaba, unveiled Sesame, which builds a credit score based on factors including the volume of purchases a customer makes with Ant’s Alipay payment system and whether a customer pays bills on time.

Though it may seem creepy to judge creditworthiness based on someone’s web search or location history, Rieke of Upturn said it’s likely that such a system will give consumers more access to credit.

“If someone has no traditional credit, those things will yield something that’s better than nothing,” he said.

Indeed, Merrill said the Baidu-ZestFinance deal is aimed at scoring consumers who are left out of the system now.

“Today, three out of four Chinese citizens can’t get fair and transparent credit,” he said. “For a small amount of very carefully handled loss of privacy, to get more easily available credit, I think that’s going to be an easy choice.”

*BIIA Editorial Comment:  According to the Credit Reference Center (CRC) of the People’s Bank of China, the CRC has approximately 840 million consumers in its database.

Baidu’s search practices have come under intense scrutiny by the regulator.  Letting ZestFinance’s system loose on a trove of information about what consumers are looking for online, where they go and what they purchase through merchants on Baidu’s e-commerce platform, may cause a similar reaction by the regulator for credit information and credit scoring.