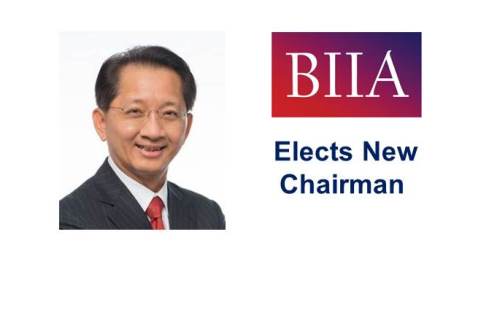 Bangkok, Thailand October 18th, 2017:  At the BIIA Annual General Meeting today the membership elected Mr. Thirachai Phuvanatnaranubala as a director of BIIA and chairman of its board of directors.

Joachim C Bartels, Managing Director of BIIA, thanked outgoing chairman David Worlock, a co-founder of BIIA, for his leadership and guidance in the development of our association from a modest beginning of 12 members to its current size of 71 members.  Bartels welcomed incoming chairman Thirachai, thanking him for providing his expertise and know-how in leading BIIA to its next phase of development. Mr. Thirachai was Thailand’s Finance Minister in 2011/2.  He is currently Chairman of the Audit Committee of Thai Life Insurance Company, one of Thailand’s three life insurers, and Advisory Chairman to the Board of Directors, National Credit Bureau Co., Ltd., Thailand’s only consumer credit information provider (a member of BIIA). His opinion is highly respected and widely quoted in public media in Thailand and South East Asia.

He was Secretary General of the Securities Exchange Commission of Thailand between 2003 and 2011 and Chairman of ASEAN Capital Market Forum.  He obtained his first degree on Economics at the London School of Economics and Political Science, London University, and later became a Fellow of Chartered Accountants after training at Price Waterhouse, London.  He started his career at the Bank of Thailand, the country’s central bank.  His last position there was Deputy Governor.

As former central banker, former finance minister and an advisory chairman to the board of directors of the National Credit Bureau means that BIIA has gained a competent resource from the user and regulatory side of our industry.  We look forward to his guidance and insights.