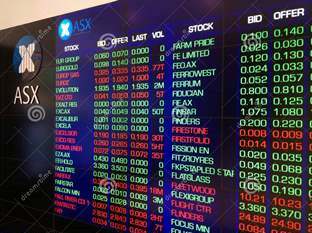 ASX Says Yes: Stock Market to Settle Trades with Digital Assets.  Becomes the first mainstream exchange to migrate one of its core services to a blockchain-based system.

After two years of building proofs of concept, working with potential users and testing the implementation, the much-anticipated decision represents a key milestone, as ASX is set to become the first mainstream exchange in the world to migrate one of its core services to a blockchain-based system.

Dominic Stevens, managing director and CEO of ASX, said in a statement: “We believe that using DLT to replace CHESS will enable our customers to develop new services and reduce their costs, and it will put Australia at the forefront of innovation in financial markets. While we have a lot more work still to do, today’s announcement is a major milestone on that journey.”

The platform developed by Digital Asset uses the technology in order to allow the mutualization of financial market data and processes across multiple market participants. It does this while maintaining confidentiality and scalability – both critical for market infrastructures.

ASX also announced that the firm has taken up its pro-rata right to participate in Digital Asset’s recently announced Series B financing. With this, the total amount raised by Digital Asset to date is over $115 million.

Digital Asset combines unparalleled financial markets leadership with world class technologists across multiple fields in one of the fastest growing fintech companies in the world. The Digital Asset Platform is the only Distributed Ledger platform to have been developed according to the production requirements of the world’s largest financial institutions.

Founded in 2014, Digital Asset now has offices in five countries, serving global clients like the ASX and DTCC. We understand the needs of regulated markets and how to apply this new technology to existing institutions effectively and safely.

The Digital Asset Platform delivers flexible infrastructure for regulated financial institutions to share processes and data securely, on a need-to-know basis, without the need for reconciliation. It combines a permissioned Distributed Ledger with a powerful financial modeling language to ensure that each institution operates from a single source of truth.

Further commentary by Coindesk:  The Takeaway

Overshadowed by the bitcoin price action, the enterprise use case  – and one of its most prominent evangelists – scored a major advance this week. But it was a hard-won victory.

That’s right, replace. This is not another pilot or a proof of concept or a sandbox, it’s real production.

Masters called the agreement “precedent-setting,” and it’ll be interesting to see what else her company does with its $115 million war chest after this prolonged and successful courtship.

But the achievement is all the more impressive considering that the ASX was publicly skeptical about the technology throughout the testing process.

So skeptical that the exchange had a contingency plan in place, in case it decided Digital Asset’s technology wasn’t suitable.

It probably didn’t help that just months after the partnership with DA was announced, the ASX CEO who had championed blockchain resigned (even though the exchange quickly reaffirmed its commitment to exploring the tech’s possibilities.)

And it almost certainly didn’t help when, about a year into the process, stakeholders started to express disillusionment about blockchain in the Australian financial press.

Despite all these hurdles, Masters’ team won over the ASX.

“We believe that using DLT … will enable our customers to develop new services and reduce their costs, and it will put Australia at the forefront of innovation in financial markets,” Dominic Stevens, managing director and CEO of the ASX, said in announcing the final decision.

Believe. That’s a strong word, one you hear often in bitcoin, but very little in enterprise blockchain.

And perhaps rightly so. Financial market infrastructure is, to use the parlance of regulators, “systemically important” – too big and too interconnected with the rest of the economy to bet on a buzzword. The careful, deliberate approach ASX took with DA before closing the deal this week was appropriate. If anything, it’s remarkable it took only two years to get this far.

But that in turn means others watching and participating in the space are going to have to exercise patience as well. This is not the kind of technology where you can “move fast and break things,” as Facebook famously encourages its employees to do.

Bitcoin’s resurgence this year has embarrassed the know-it-alls who wrote it off two years ago, confidently declaring that the blockchain, not the currency, would take off. But DA’s big win shows it was also premature to declare commercial blockchains over, as many bitcoiners were understandably tempted to do this year.
– Marc Hochstein  Coindesk