BSG Commentary on the UBM and Alibaba Strategic Alliance 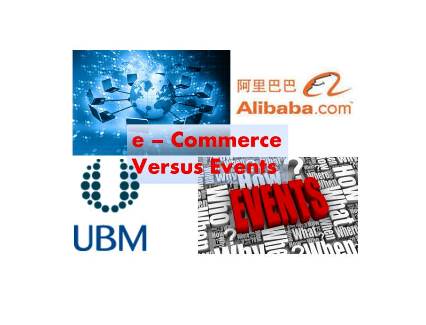 We reported yesterday about the UBM and Alibaba strategic alliance and asked the question: “Will this alliance spell the end of face to face events market places?”  The answer was delivered today.  Perhaps it will not happen as quickly as insinuated.  BSG’s Chairman, Paul Woodward, sees this as the spark that might finally start the fire that transforms physical business events with the power of the digital world.

At BSG, we have been talking about the potential of Alibaba to move into face-to-face events for many years. Alibaba has the marketing savvy, the digital expertise and, of course, the database necessary to make a successful trade show.

Until now, Alibaba has been mostly been uninterested in trade fairs, but the potential synergies are both huge and crystal clear. Alibaba reports that its online platform has 350 million active users and its mobile platform has an average of 290 million monthly users. Together, its various platforms posted a gross merchandise volume (the value of goods traded on Alibaba’s platforms) of over US$390 billion in 2014.

On the other side of partnership, UBM is one of the largest global event organisers – running more than 400 business events annually. It is an industry leader in key markets including China, India and the U.S. In Asia, UBM organizes 230 events each year and has offices in 24 cities across the region.

The alliance of these two organisations is without a doubt the key development of the year in B2B media. The details of the partnership are still fuzzy and the challenges are not inconsequential, but the short- and long-term potential upside is huge.

At its simplest level, the alliance could allow UBM to market its events to Alibaba’s database of millions of businesses – opening up a whole new world of potential exhibitors and visitors. In addition, Alibaba could also pull invaluable insight and analysis from the millions of searches that run through its platform to guide UBM to better cover the hot product categories or even launch new events to address emerging buying trends in a particular industry or geography.

BSG’s Chairman, Paul Woodward, sees this as the spark that might finally start the fire that transforms physical business events with the power of the digital world:

“I’ve been following Alibaba ever since BSG was founded 15 years ago. We talked to them about trade fairs well over 10 years ago. Since then, they have continued to focus on building up what is arguably the world’s largest e-commerce company and, with a few exceptions, they’ve kept their focus on the digital world.

“But I was just dipping this week into the fascinating book written by Porter Erisman, head of international PR in the early years. In Alibaba’s World he talks about a very early meeting he attended with Jack Ma to meet customers in China back in 2000. He quotes Ma as telling those customers, “Although we see you online all the time, nothing replaces meeting face to face”.

“So, it’s interesting to watch where things might go with the news this week that UBM Asia and Alibaba.com are starting to work together to link the digital marketplaces of the B2B world with physical trade fairs around Asia. If it’s successful, this could be the spark to the fire that we’ve all been waiting for in terms of the transformation of the physical events world fully to embrace the opportunity and challenge represented by its digital counterparts.

“I don’t anticipate that UBM are about to start giving away exhibition stands to “build audience” any time soon, but it will be fascinating to see where this leads. Managing the culture clash is going to be a challenge and there are many ways in which this could go. But my nose will be pressed firmly to the window to watch it.

“Of course, you’ll also be able to read all about it in Hong Kong’s South China Morning Post newspaper which Jack Ma just bought this week as well. And, he’s going to make access to that free of charge online. So, trade fair friends, watch out for your margins. A new and possibly scary world may have just arrived on your doorstep!”