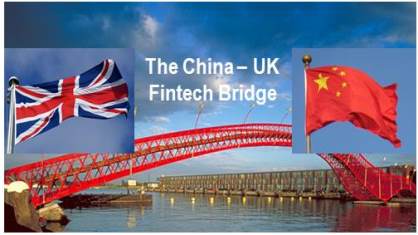 Chinese financial technology companies, which are expanding into the UK at an unprecedented rate, will get additional support from a new agreement between China and Britain. The move to link the world’s two leading fintech hubs is expected to revolutionize global fintech growth, given that China is the top fintech market and the UK is a dominant fintech hub according to Yi Gang, vice-governor of the People’s Bank of China.

The agreement for a so-called bridge between the two centers was signed on Friday by the UK’s Financial Conduct Authority and the People’s Bank of China.  The UK-China Fintech Bridge is a government information sharing tool established as part of the 8th UK-China Economic and Financial Dialogue, which took place in London on Thursday.

“As regulator, we need to adapt to the rapid development of fintech and strike a balance between financial innovation and risk management,” said Yi Gang, vice-governor of the People’s Bank of China－China’s central bank.  Yi made the remarks on Friday at the UK-China Collaboration in Fintech forum at London’s Canary Wharf, which was attended by more than 100 fintech practitioners.

Christopher Woolard, executive director of strategy and competition at the FCA, said:”I believe the UK-China Fintech Bridge will be mutually beneficial for us and the PBoC, and will be a part of our joint efforts to promote innovation and consumer protection in both of our markets.”

“Because Chinese fintech firms’ models and activities are sometimes starkly different from UK firms, we hope the bridge will help UK regulators to understand our business activities better, so they can regulate us in the UK in an effective way.”  Ant Financial is the fintech arm of China’s ecommerce giant Alibaba. It operates China’s largest online payment platform, Alipay, which entered the UK market last year.

China’s ecommerce and internet companies, which include Alibaba, Baidu and Tencent, have been at the front of China’s fintech revolution.

Another recent report, by KPMG and the Australian investment firm H2 Ventures, noted that five of the world’s top 10 fintech firms are Chinese. Ant financial topped the list.  Other notable Chinese fintech firms launching offices in the UK this year include Chengdu-based BBD and Shanghai-based Wind Information, which both sell financial data to institutional investors.