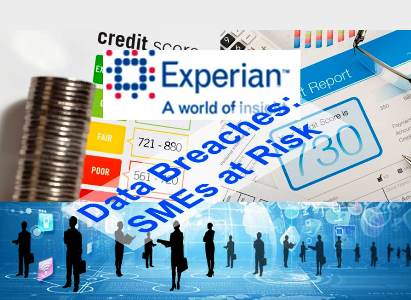 Half of small businessesin the UK have no plan in place to deal with a data breach and are drastically underestimating the cost of managing one, according to Experian.

Experian’s third annual data breach preparedness study reveals a worrying lack of understanding among SMEs regarding the true cost of a data breach, with estimates falling short by an average of 40%, which could leave the survival of many at stake if a breach were to hit. Government figures indicate that a data breach costs SMEs an average of £310,000; yet the SMEs surveyed estimated the cost to be £179,990 – a shortfall of over £130,000.

While it’s clear SMEs are underestimating these direct costs, the additional indirect costs associated with reputational damage and impacted trust makes the picture for unprepared organisations even more bleak.  Two thirds (64%) of consumers say they would be discouraged from using an SME’s services following a data breach, yet just a quarter (23%) of SMEs surveyed acknowledged this as a risk. Jim Steven at Experian said: “Our study has uncovered an ‘it’ll never happen to us’ attitude among Britain’s most vulnerable businesses. While it’s understandable that smaller businesses may feel they lack the resource or expertise to prepare for a data breach, they are also the most vulnerable. Whether due to sophisticated cybercrime or basic human error, the true cost of a breach is far worse than companies are imagining, and for small companies especially, businesses need to ask themselves whether their business could survive if two thirds of their customer base were to disappear overnight.”

Just 45% of small companies said they had a data breach response plan in place, in spite of three quarters of UK SMEs (74%) having experienced a data breach last year[2].The research revealed complacency as the main reason for inaction:

“Our research has uncovered a vast gulf between how ready SMEs think they are for a data breach and the stark reality. With high profile data breaches becoming an almost-monthly occurrence, and European legislation that’s likely to fundamentally change requirements of companies around customer notification, we urge companies of all sizes to expect the unexpected and put solid plans in place. Given the halo effect of financial implications resulting from impacted customer loyalty and longer-term reputational damage, it’s vital that businesses remember that the real people affected here are customers and they’re the ones who will ultimately vote with their feet.” Jim Steven continued.

BIIA Editorial Comment:  This is a great opportunity for Business Information Companies to provide Data Breach Solutions for their clients.  This may yet one of the most significant contributions our industry can make to improve data security.