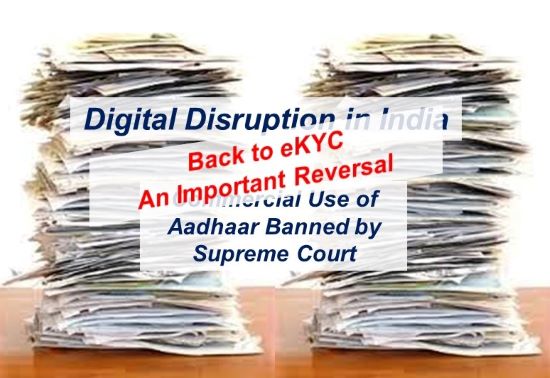 The amendment bill will allow voluntary use of aadhaar for authentication of individuals. Prevents denial of citizen entitlements based on failed aadhaar authentication!  The bill will now be introduced in Rajya Sabha’s upcoming session

Indian cabinet headed by the Prime Minister Narendra Modi has yesterday approved ‘The Aadhaar and Other Laws (Amendment) Bill, 2019’ which among other things provides for voluntary use of aadhaar as an acceptable KYC (Know Your Customer) proof for opening bank accounts, and mobile phone connections.  Similar provisions were part of the aadhaar ordinance promulgated by the Indian President Ram Nath Kovind on March 2, 2019. This Aadhaar Amendment Bill will now be introduced in the upcoming session of Rajya Sabha.

“Subsequent to this amendment, no individual shall be compelled to provide proof of possession of Aadhaar number or undergo authentication for the purpose of establishing his identity unless it is so provided by a law made by Parliament,” an official release noted.

Earlier last month, the Reserve Bank of India has also included Aadhaar to its list of documents eligible for identification of individuals and allowed banks to use Aadhaar for KYC verification if the customer gives consent. [Editorial comment: what happens if no consent is given.  No identity, no credit, no social services?]

Other provisions under the new amendment bill includes giving children an option to cancel their Aadhaar number when they reach 18 yrs of age. This was also discussed in the Supreme Court’s 2018 Aadhaar judgement.  Further, the amendment bill has proposed the deletion of section 57 of the Aadhaar Act which  allowed the use of 12-digit aadhaar number by the State or any corporate or person for authentication purposes. Section 57 was also struck down by the Supreme Court in the 2018 judgement.

It also provides for establishment of Unique Identification Authority of India Fund and introduction of civil penalties for violating Aadhaar Act.  “The Aadhaar and Other Laws (Amendment) Ordinance, 2019 amongst other things envisaged strengthening of the Aadhaar Act as per the directions of the Supreme Court and recommendations of Justice B.N.Srikrishna(Retd)  Committee,” release added.