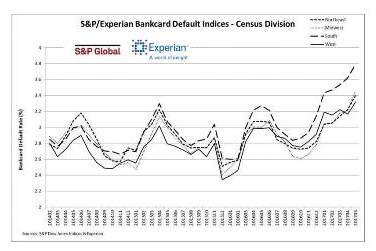 Jointly developed by S&P Dow Jones Indices LLC and Experian, the S&P/Experian Consumer Credit Default Indices are published on the third Tuesday of each month at 9:00 am ET. They are constructed to track the default experience of consumer balances in four key loan categories: auto, bankcard, first mortgage lien and second mortgage lien. The Indices are calculated based on data extracted from Experian’s consumer credit database. This database is populated with individual consumer loan and payment data submitted by lenders to Experian every month. Experian’s base of data contributors includes leading banks and mortgage companies, and covers approximately $11 trillion in outstanding loans sourced from 11,500 lenders.