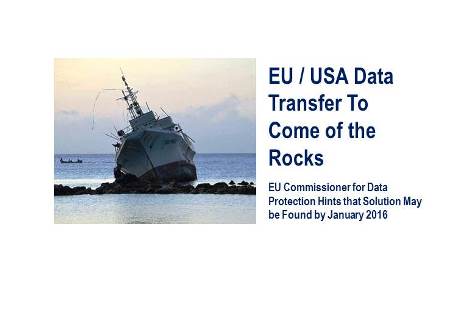 Speaking in Washington on November 16, 2015, EU Commissioner responsible for data protection, Věra Jourová, said that she is confident a solution for EU-US data transfers will be found by January 2016 because:

1. “we have clear guidelines from Europe’s highest court”
2. “we can build on discussions held since January 2014”
3. “it is in both Europeans’ and Americans’ interest”
4. “there is a strong political commitment at the highest level on both sides of the Atlantic.”

Commenting on the current negotiations with the US, Jourová said: “The US has already committed to stronger oversight by the Department of Commerce, stronger cooperation between European Data Protection Authorities and the Federal Trade Commission. This will transform the system from a purely self-regulating one to an oversight system that is more responsive as well as pro-active.”

“We are also working with the US to put into place an annual joint review mechanism that will cover all aspects of the functioning of the new framework, including the use of exemptions for law enforcement and national security grounds, and that will include the relevant authorities from both sides.”

“Finally, when it comes to the intervention of public authorities, in particular for reasons of law enforcement and national security, the Court underlines that such access to data must be subject to clear conditions and limitations.”
See Věra Jourová’s speech at http://europa.eu/rapid/press-release_SPEECH-15-6104_en.htm

BIIA reported on this subject in early October 2015